Final judgment in the light of inclusion

- May 21, 2008
If all people are already reconciled to God in Christ (2 Cor. 5:18), then why a final judgment when Jesus returns? And why, as a result of that judgment, will God cast out some if all are already included? We note Scripture's use of "casting into outer darkness," "separating sheep from goats" and similar phrases to speak of circumstances related to the final judgment. We acknowledge that such phrases are symbolic. But symbolic of what? 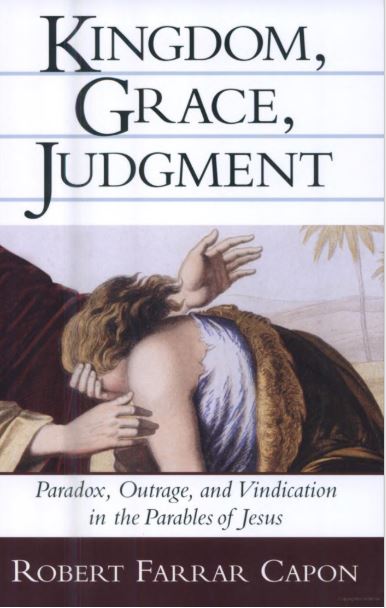 In answering this and related questions, I've found help from Episcopal priest-theologian Robert Farrar Capon in Kingdom, Grace, Judgment: Paradox, Outrage, and Vindication in the Parables of Jesus. In this book, Capon analyzes Jesus' parables, which speak frequently of judgment and hell. Following are illustrative quotes. I recommend a careful reading of the whole book for the details, including Capon's careful scriptural argumentation. For a related article from theologian Baxter Kruger, click here.

The [final] judgment occurs only after the general resurrection of the dead. And since the resurrection of the dead (of the just and the unjust alike) is something that happens to them solely by virtue of Jesus' resurrection...everything that happens after the second coming of Jesus - judgment, heaven and even hell - happens within the triumphantly reconciling power of his death and resurrection. We simply don't know how or to what degree that power affects the eschatological situation. Take, for example, the question of whether we are in a position to discuss the meaning or even the possibility of ultimate human rejection of the reconciliation. To be sure, Scripture says clearly enough that the sovereign, healing power of Jesus can and will be refused by some. I have no problem with that. What I do object to, however, are the hell-enthusiasts who act as if God's whole New Testament method of dealing with evil will, in the last day, simply go back to some Old Testament "square one" - as if Jesus hadn't done a blessed or merciful thing in between...Admittedly, the Bible talks about all sorts of creatures going to hell. But my point is that if they do go, they go even there in the power of a resurrection by which God in Christ has reconciled all things to himself, hell included. There is no one anywhere in the final scheme of things who is floating around in his own old unrisen state. Resurrection is not a reward for the chosen few; it is the only game there in in the whole eschatological town (p. 96).

Doesn't Scripture say that there will be some (or even many) who will reject the reconciliation? Of course it does. But the very hell of hell lies precisely in the fact that its inhabitants will be insisting on a perpetual rejection of an equally perpetual gift. It will be an eternal struggle to escape from the grip of a love that will never let them go. And for that everlasting stand-off, I think, there is not a word in Scripture that is too strong: not the "fire that is not quenched," not the "worm that dieth not," not the "outer darkness," not the "bottomless pit," not the "weeping and gnashing of teeth" - and certainly not the utterly fruitless "second death" (p. 117).

Notice something peculiar about that [last] day. It occurs...after the general resurrection: every last person who arrives at it arrives in the power of Jesus' reconciliation. The judgment, therefore, is first of all the announcement not of vindictiveness but of vindication. Everyone who comes before the Judge has already been reconciled by the dying and rising of the Judge. The only sentence to be pronounced, as far as the Judge himself is concerned, is a sentence to life, and life abundant. Someone once said, "The world God loves is the world he sees in his only-begotten Son." If that is true, it means that at the last day, the whole world - the all that Jesus, in his being lifted up, has drawn to himself - is accepted in the Beloved. No one has to accept that acceptance, of course. It is entirely possible, both humanly and scripturally speaking, for anyone to thumb his nose at the reconciliation and try to go it on his own forever. And it is totally certain that if anyone wants to indulge in that kind of behavior, there is no possibility of keeping such a party pooper at the marriage supper of the Lamb. Hell is the only option for the finally recalcitrant. But note well that nobody goes to hell because he had a rotten track record in the world - any more than anyone goes to heaven because he had a good one....We are not judged by our previous performances...rather, we are judged by what Jesus did for us on the cross....Both heaven and hell are populated entirely and only by forgiven sinners. Hell is just a courtesy for those who insist they want no part of forgiveness (pp. 131-132).

Question: ...Do you actually mean that there's nobody at the Last Judgment who hasn't been given the righteousness of Christ? Answer: Yes, that's exactly what I mean. Question: Then how do some of them get judged [as evil]?...Answer: Because even though they've got his righteousness, they've decided they don't like it; they can't stand the thought of not being accepted on their very own personal merit (pp. 134-135).

A whole New Jerusalem [will be] populated by nothing but sinners whose citizenship is based on nothing but their acceptance of forgiveness. If anybody doesn't want to be there on that basis, he can, quite literally, just get the hell out (p. 136).

Hell is only for those who insist on finding their life outside of Jesus' death (p. 232).

The judgement finally pronounced will be based only on our acceptance or rejection of our resurrection from the dead. The last judgment will vindicate everybody, for the simple reason that everybody will have passed the only test God has, namely, that they are all dead and risen in Jesus. Nobody will be kicked out for having a rotten life, because nobody there will have any life but the life of Jesus (p. 301).

For Jesus came to raise the dead. He did not come to reward the rewardable, improve the improvable, or correct the correctable; he came simply to be the resurrection and the life of those who will take their stand on a death he can use instead of on a life he cannot (p. 317).

The resurrection of the dead...is not the return of corpses to their previous living state; it is an eternally new creation arising out of an equally eternal death - just as, if you will, our old, natural existence is a perpetual, moment-by-moment emergence out of an equally perpetual nothing (p. 324).

The church, by and large, has always been more receptive to judgment-as-settling-scores than to judgement as proceeding out of, and in accordance with, the reconciling grace of resurrection. Christian preachers regularly blow the Gospel of grace clean out of the water with sermons that make reward and punishment, not resurrection with its sovereign pardon, the touchstone of judgment...[Jesus] has taken away all the sins of the world and...has accordingly, solved all the problems he once had with sin....He "did not come to judge the world but to save the world" (John 12:47)..."There is therefore now no condemnation to those who are in Christ Jesus" (Rom. 8:1) (pp. 350-351).

The judgment, is precisely one of forgiveness, of a saving grace that works by death and resurrection....The action of Jesus in his passion - his saving, judging inaction, if you will - governs everything (p. 352).

Jesus must not be read as having baited us with grace only to clobber us in the end with law. For as the death and resurrection of Jesus were accomplished once and for all, so the grace that reigns by those mysteries reigns eternally - even in the thick of judgment....Inclusion before exclusion is the chief interpretative principle of [Jesus'] parables of judgment. As a general rule - and especially in his specific parables of judgment - Jesus is at pains to show that no one is kicked out who wasn't already in.... Judgment... never comes until after acceptance: grace remains forever the sovereign consideration. The difference between the blessed and the cursed is one thing and one thing only: the blessed accept their acceptance and the cursed reject it; but the acceptance is already in place for both groups before either does anything about it. To put it another way, heaven is populated by nothing but forgiven sinners and hell is populated by nothing but forgiven sinners: the Lamb of God takes away the sins of the kosmos, not just of the chosen few (John 1:29); Jesus said "I, if I be lifted up, will draw all to me (John 12:32). The difference between heaven and hell, accordingly, is simply that those in heaven accept the endless forgiveness, while those in hell reject it. Indeed, the precise hell of hell is its endless refusal to open the door to the reconciled and reconciling party that stands forever on its porch and knocks, equally endlessly, for permission to bring in the Supper of the Lamb (Rev. 3:20) (pp. 356-357).

[Updated 2/12/2020]
Welcome to The Surprising God where Grace Communion Seminary (GCS) on behalf of Grace Communion International (GCI) explores the content and application of Incarnational Trinitarian Theology. Except as noted, posts are from GCS faculty member Ted Johnston. Though GCS and GCI embrace what is expounded here, blog posts are not official doctrinal statements. To comment on what is posted here, go to GCS's two Facebook groups (Trinitarian Theology Forum and Trinitarian Ministry and Worship) where posts from here are often re-posted.