Memories and music from the mountains

- December 24, 2009
This post was contributed by worship leader Mike Hale.
The last few days we've been confirming logistics and details for tonight’s Christmas Eve service.  (Thanks coordinators and team members!)  As we’ve done for about ten years, two small congregations from different denominations (but bound to each other and to Jesus by the Holy Spirit) will come together on Christmas Eve to sing, pray, preach and present readings about the Father’s love known in the Savior Jesus and his breaking into his creation as God with us and for us.

Tonight’s plan for music includes traditional carols, contemporary songs, children singing Tommy Walker’s Happy Birthday Jesus, and the service concluding with the singing of Silent Night as we light one another’s candle (originating from the Christ candle) and face one another in song.  I’ll be serving in one of my favorite ways—just singing harmony. 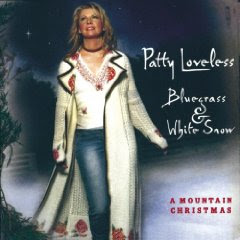 Weeks ago I blogged about favorite Christmas CD’s from Chris Tomlin, Third Day and others, but it should also be said that one of the all-time favorites at our house is the Patty Loveless album Bluegrass & White Snow (2002 SONY).  Patty’s Appalachian mountain voice is in top form, and guest stars Emmylou Harris, Ricky Skaggs, Vince Gill, Dolly Parton, Trisha Yearwood, Amy Grant, Rebecca Lynn Howard and others each take turns adding their distinctive harmonies atop a foundation of rich acoustic music performed by some of Nashville’s elite session musicians.

Please hold that thought, and we’ll come back to it.

When my brother and I were in our early teens, we happily and frequently took our instruments to jam sessions at our uncle Henry’s house.  Henry was a well-known country musician in the area—a huge man with a huge heart—and if he wasn’t at a gig, he was fond of hosting jam sessions—especially for young musicians learning their craft.

But while most of us were just working out the chord changes and patterns on our instruments in the setting of a rhythm section, a 12 year old named Steve Gibson was blowing our doors off with guitar fills and solos that always left us amazed.  A prodigy of sorts, Steve was already a top instrumentalist in the region—already sitting in regularly with well-known regional artists and bands, including the band in which uncle Henry played.  Steve was incredibly gifted, but he still worked hard on his instruments, and was not in the least bit pretentious.  It was a real treat to jam with Steve, and just having him in the room seemed to raise everyone else's level of playing as well.

My own instrumental skills were nowhere near the top of the heap, but when I turned 16 another one of my favorite musical uncles kindly hired me as a weekend warrior to sing harmony and play bass guitar with his well-established band.  Still I enjoyed keeping an eye on Steve Gibson and the bands he played with as his young career skyrocketed.
Four years later when I moved to Texas to attend college, none of us were surprised to see Steve move to Nashville and quickly become a highly sought after Music City session musician—playing on thousands of tracks with the likes of George Strait, Hank Williams Jr., George Jones, Willie Nelson, Reba McEntire, Kris Kristofferson, Martina McBride, Randy Travis, England Dan and John Ford Coley, and Patty Loveless among others.
Fast forward three decades to the Patty Loveless album Bluegrass & White Snow, and as Stuart Duncan is working his fiddle magic on these beautiful Christmas tunes, Steve Gibson is among the other "A List" musicians in the credits, playing guitar, mandolin and mandola.

So while each song on this album is a blessing in itself, and the singing and playing couldn't be better, somehow having Steve in the mix brings back fond memories of those jam sessions decades ago when a generous host brought together players of every level to participate for the good of the group—to show up with whatever abilities we had and to give of ourselves in whatever way we could (occasional wrong notes and all) so we could all grow, learn, and build fond memories in the shared experience of the musical journey.

If you are reading this, it is likely that you serve a congregation in some way.  Let’s be reminded that whether we are parking cars, working security, ushering, stacking chairs, singing, preaching, doing a drama reading or just showing up to pray and fellowship with everyone else—we are each blessed beyond belief to participate through the Spirit in the Father's love and the ongoing ministry and life of Christ.  What a shared experience—what a journey!  Merry Christmas everyone!
Welcome to The Surprising God where Grace Communion Seminary (GCS) on behalf of Grace Communion International (GCI) explores the content and application of Incarnational Trinitarian Theology. Except as noted, posts are from GCS faculty member Ted Johnston. Though GCS and GCI embrace what is expounded here, blog posts are not official doctrinal statements. To comment on what is posted here, go to GCS's two Facebook groups (Trinitarian Theology Forum and Trinitarian Ministry and Worship) where posts from here are often re-posted.