If introverts are called and gifted by God, then why is church designed for extroverts?

- August 05, 2010
This post was contributed by worship leader Mike Hale.
Church, especially the evangelical church, is largely designed for extroverts—and that’s a problem, especially since fully half of us are actually introverted. Such is the picture drawn by Adam McHugh in Introverts in the Church: Finding Our Place in an Extroverted Culture (2009, InterVarsity Press).

McHugh cites comprehensive surveys of the last ten years showing 50.7 percent of the general population as introverts, and then explores ways to more fully include introverts in the evangelical church, and better utilize their God-given abilities. As to why the church is so bent toward extroversion? The author says that besides the larger culture (schools, corporations and social institutions) already being slanted toward extroversion, it is also because churches place such a high value on relationships.

So we set up 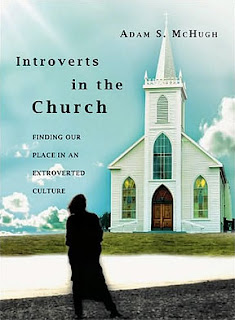 "…. for some churches spirituality is equated with sociability. The mark of a progressing faith is familiarity with a growing number of people and participation in an increasing number of activities" (p. 20).

The author points to evangelicals inheriting much of their values of piety and passion from the Second Great Awakening of the late eighteenth and early nineteenth centuries, and the tent revivals that led to twentieth-century evangelical crusades, where genuine devotion and obedience were what mattered, along with hard work and common sense. Such people were skeptical of intellectual sophistication and thoughtful reflection. The influential D. L. Moody was to have said, “My theology! I didn’t know I had any!”

"The pragmatism that we [evangelicals] have inherited fosters an action-oriented culture….[and] values the doer over the thinker…. There is a restless energy to evangelicalism that leads to a full schedule and a fast pace….[saying] busyness is next to godliness" (p. 26).

McHugh quotes Eugene Peterson’s indictment of such Christianity: “American religion is conspicuous for its messianically pretentious energy, its embarrassingly banal prose, and its impatiently hustling ambition.”

Also when people think of God as the “extrovert” closely watching all people, then extroversion is thought of as a sign of his people, and in that environment “introversion” is sometimes equated with disobedience. Thus mainstream evangelicalism has created an environment that can be

"marginalizing and even exclusive of introverts. For example, the up-front piety….and the expectations for outward, emotional displays of faith, can feel invasive and artificial to introverts. Meanwhile the anti-intellectual stream can alienate some introverted thinkers who find that their love of ideas, comfort in solitude and powers of concentration translate into a life of intellectual pursuits. Furthermore, the pragmatism that seeks measurable, tangible gauges for success strikes many introverts, who appreciate depth, as superficial and oversimplistic, and our action-oriented culture does not always value people who are thoughtful and reflective" (p. 28).

Little wonder introverts feel displaced, marginalized, and guilty. An introvert himself, McHugh [pictured at right] says that to cope with this bias, and seek acceptance, they may begin masquerading as extroverts, but eventually become weary of fighting and “long to live faithfully as the people we were created to be.”

He believes that in order to capture the depth and breath of God’s mission for the church, there must be a combination of both introverted and extroverted qualities moving together in partnership. McHugh is even convinced that

"Introverts are an important ingredient in the antidote to what ails evangelism. Our slower pace of life, our thoughtfulness, our spiritual and intellectual depth, and our listening abilities are prophetic qualities for the evangelical community, calling us to a renewed understanding of God and a fresh reading on the abundant life Jesus came to give us" (p. 31).

Click here to read an interview by Mark Roberts with author Adam McHugh, an ordained minister, a spiritual director, and an introvert.
Welcome to The Surprising God where Grace Communion Seminary (GCS) on behalf of Grace Communion International (GCI) explores the content and application of Incarnational Trinitarian Theology. Except as noted, posts are from GCS faculty member Ted Johnston. Though GCS and GCI embrace the theology expounded here, posts are not official statements of doctrine. You may comment on posts where they are reposted on GCS's two Facebook groups: Trinitarian Theology Forum and Trinitarian Ministry and Worship.