Keeping it practical: boiling down a bazillion words

- October 02, 2010
This post was contributed by worship leader Mike Hale.
A reader sends a great question, “What songs and hymns reflect the theology that is represented on this Trinitarian worship blog?”

For the past year we’ve touched on the theology of T.F. Torrance and J.B. Torrance, and a generation of theologians they mentored, such as Andrew Purves, Chris Kettler and John McKenna, as well as an even younger generation of teachers such as Julie Canlis, Jeff McSwain and Robin Parry. What we’ve seen is that this Christ-centered, Trinitarian, incarnational theology has everything to do with worship!

And how is the essence of this th 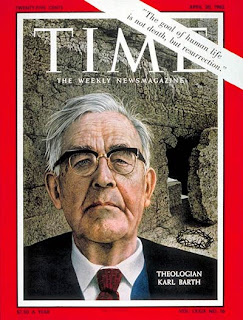 eology put into songs for the people of God? We do well to revisit the wisdom of one of T.F. Torrance’s great teachers, Swiss theologian Karl Barth—arguably the most significant theologian of the 20th century, and perhaps the most important theological voice since the Reformation. Christianity Today called Barth “…one of the giants in the history of theology.” Pardon the pun, but Barth even graced the cover of TIME magazine during his one visit to America in 1962.

[Note: Barth’s important bazillion-word, 13-volume Church Dogmatics, was written over the span of 35 years, covering the doctrines of the Word of God, God, Creation and Reconciliation, taking “all that has been said before and to think it through once more and freshly to articulate it anew as a theology of the grace of God in Jesus Christ.” Sort of makes your head spin, doesn’t it?]

But when the old professor was asked at Union Theological Seminary in Richmond VA (during one leg of his U.S. visit) to summarize the essence of all he had discovered and published in his long theological life, Barth is said to have paused a moment [drum roll here] and replied, "Jesus loves me this I know, for the Bible tells me so." [Huge cymbal crash!] (From the epilogue to Karl Barth’s, Fragments Grave and Gay, editor Martin Rumscheidt, London: Collins, 1971, p. 124.)

My point is not that all our worship songs and hymns need be as simple as that famous children’s song, but that as Barth demonstrated, this theology boils down to the love of God revealed, known and lived out in the person that is Jesus, and pointed to in scripture—and that’s what we sing about as we worship.

Youth minister and founder of Reality Ministries Jeff McSwain points to the second half of the first verse of the Anna Warmer song Barth quoted, saying unfortunately Christians often go about life and evangelism as if people only belong to Jesus and are included in his love only if we say and do certain things. Instead, McSwain preaches the gospel

with an emphasis on theological belonging, the idea that humanity belongs to Jesus Christ by virtue of creation and redemption. Rather than splitting Christ as Creator from Christ as Redeemer, [my aim is to] preserve the gospel symmetry proclaimed by Paul in Colossians 1, where he speaks of the Christ who created and reconciled all things (Col. 1:16, 20). This is the gospel “that has been proclaimed to every creature under heaven” (Col. 1:23) [and declaring] every person is included not only in the first Adam but also in the second (Rom. 5:18).

[We] embrace kids at their worst because that is the way God is! We do not show love and grace to kids so that we can eventually introduce them to a different “god” (i.e., a god who is angry and withdrawn)…. We teach our children these words—‘Jesus loves me, this I know, for the Bible tells me so, little ones to him belong, they are weak, but he is strong’—are we to tell kids that when they get to be a certain age this is no longer the case? Are we to tell them they belong to Jesus if . . .? Is belonging with an if really belonging at all?

[Click HERE to see Jeff McSwain in the first of three interviews on You're Included, as he talks about how to help young people experience the loving embrace of Jesus Christ.]

We’ll continue discussing songs and hymns on this blog. But whether we are a kid or an old theology professor, Jesus is our song, our prayer—our worship. He loves us and we belong to him in spite of our weakness. It’s as simple as that. You can work out what songs you use to proclaim it, whether you sing it in an old Fanny Crosby hymn, or a new song by Chris Tomlin or Matt Redman.

It’s the message of the world’s best known children’s song. It’s what the people of God are blessed to know and experience before we can ever get around to a bazillion other words.
Welcome to The Surprising God where Grace Communion Seminary (GCS) on behalf of Grace Communion International (GCI) explores the content and application of Incarnational Trinitarian Theology. Except as noted, posts are from GCS faculty member Ted Johnston. Though GCS and GCI embrace what is expounded here, blog posts are not official doctrinal statements. To comment on what is posted here, go to GCS's two Facebook groups (Trinitarian Theology Forum and Trinitarian Ministry and Worship) where posts from here are often re-posted.