At Christmas, we celebrate the Incarnation---the stunning miracle by which the eternal Son of God, while not ceasing to be fully God, became fully human in the person of Jesus Christ. 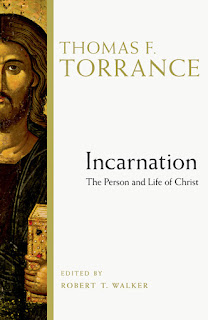 As noted by Thomas F. (T.F.) Torrance in the book Incarnation, the Person and Life of Christ, the Incarnation is a "redeeming event" by which the Son of God assumed "our unholy humanity" with the result being that, "his purity wipes away our impurity, his holiness covers our corruption" (p82). This association of the Incarnation with our redemption is often overlooked at Christmas; yet it is central to the Christmas story.

As T.F. notes, through the Incarnation, God, in the person of Jesus, permanently united our human nature with his divine nature. The result of this union (which includes us in Jesus' birth, life, death, resurrection and ascension), is that humanity is given to share in the righteousness of Jesus: "Not only the negative righteousness in the remission of sins but also a share in the positive righteousness of [Jesus'] obedient and loving life lived in perfect filial relation on earth to the heavenly Father" (p82). Thus, according to Torrance, our redemption involves not only the forgiveness of sin by sharing in Jesus' death, but also "the filial relation which the Son of God lived out vicariously in our humanity in perfect holiness and love. He achieved... [this redemption] in himself in assuming our human nature into oneness with himself, and on that ground gave us to share in it, so providing us with a fullness in his own obedient sonship from which we may all receive" (p. 82).

May we this Christmas hear afresh the stunning message of the redeeming nature of the Incarnation. And may we, in believing (sharing Jesus' own belief), receive what he so graciously has provided---a share in his relationship with God his Father, and now ours.
Welcome to The Surprising God, a blog moderated by Grace Communion Seminary (GCS) faculty member Ted Johnston. Here, Ted and other authors explore incarnational Trinitarian theology on behalf of GCS and its sponsor, Grace Communion International (GCI). Though GCS and GCI both embrace the Nicene faith addressed here, posts on this blog are not official doctrinal statements. Comments on blog posts may be posted on either of GCS's Facebook groups: Trinitarian Theology Forum or Trinitarian Ministry and Worship.