Life in the Trinity: Interpreting Scripture 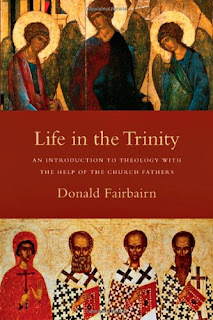 Fairbairn advocates the Christ-centered approach to biblical interpretation utilized by many of the church fathers. That approach begins with the central message of Scripture (what the fathers called the rule of faith) and then understands a specific text in that light. In this way, one starts with the broad context (story) of all Scripture and only then focuses on the narrow particulars.


Unfortunately, we often do the reverse. We read a particular passage, then look only to its immediate (narrow) context to determine its meaning. When we do so, the broad context and thus the true meaning is often distorted or entirely missed.

Fairbairn elaborates, pointing to the church father's understanding of the rule of faith:

We [tend to] start with ourselves and ask how God relates to us. The church fathers started with God, and especially with Christ, and asked how we participate in Christ. This is why virtually all of patristic thought saw theosis - humanity's becoming somehow a participant in the divine life - as the link between God and humanity. Furthermore, this is why one strand of patristic thought...understood theosis in terms of the Father's relationship to the Son and saw our participation in this relationship as the scarlet thread of the Christian faith. If one does theology in the way the church fathers did, with the life of the trinitarian persons as the heart, then one will seek to find those trinitarian persons - especially the preincarnate Son - throughout the Old Testament. (p115, emphasis added)

Note that the church fathers saw the rule of faith as Jesus and our relationship with God in him. To them, this  scarlet thread unifies all Scripture and the Christian faith. Fairbairn illustrates with a quote from Irenaeus concerning interpreting the parables of Jesus:

All Scripture, which has been given to us by God, shall be found by us perfectly consistent; and the parables shall harmonize with those passages which are perfectly plain; and those statements the meaning of which is clear shall serve to explain the parables; and through the many diversified utterances [of Scripture] there shall be heard one harmonious melody in us, praising in hymns that God who created all things. (p112, emphasis added)

In interpreting the Old Testament, the church fathers "scoured the Hebrew Scriptures for hints, prefigurings and foreshadowings of Christ..." (p111-112).  In order to avoid over-allegorizing the Old Testament in order to find Jesus there (as some of the church fathers are accused of having done), Fairbairn suggests that we look in Scripture for the important Christ-centered theme of promise, upon which the related biblical idea of covenant is built:


Shortly after the Fall, God gave humanity a promise that a single person would come to undo the effects of that Fall and bring humankind back into the fellowship of the Trinity. Then throughout the Old Testament period, God revealed with increasing specificity where this promised person would come from, why people would need him, what he would do, and most important, that he would be not merely a human person but a divine person, the Son of God.

...This idea of promise is fundamental to the Old Testament...even more foundational than the concept of covenant or the question of how God relates to humanity at different periods in redemptive history. The concept of promise places the focus on God, because God has made the promise, and the content of the proimise is that God will send his own Son to us. Thus the idea of promise provides the context in which the question of God's relationship to humanity is addressed. Or, to say it differently, the promise underlies and provides the groundwork for God's covenant (or covenants) with human beings. (pp 121-122)