A Trinitarian discussion of the ‘Trajectory of Worship’

- March 26, 2011
This post was contributed by worship leader Mike Hale.
The March 2011 edition of Christianity Today contains five thought-provoking articles related to worship, including an excellent article by John Kossler, The Trajectory of Worship: What’s really happening when we praise God in song?

Kossler (currently professor of pastoral studies at Moody Bible Institute) begins by warmly describing his worship journey of nearly forty years, and the colorful variety of songs, settings and fellow worshipers, including early memories of the Glad Tidings Pentecostal Church and the Lost Coin Coffee House.

But having previously considered himself a man of wide-ranging eclectic tastes, raised on everything from Beethoven to Bix to the Beatles, and “baptized by immersion in the waters of musical diversity,” he admits to a more recent time in which he became a ‘worshiping curmudgeon’—trying hard not to begrudge others of worship music that was not of his choosing, but becoming quite annoyed nonetheless. Upon reflection he concludes his problem was not so much aesthetics, but vertigo, and that he needed to reorient his view of the trajectory of worship, which is not actually something that moves from earth to heaven.

The trajectory of heavenly worship begins with God and descends to earth. This trajectory is reflected in Psalm 150, where praise begins in the heavenly sanctuary and resounds throughout the domain of God. From there it is taken up by those on earth, who praise God with a variety of instruments and dancing, until “everything that has breath” praises the Lord (Ps. 150:6) .

We find the same trajectory of worship in Revelation 5. John, who has been caught up to heaven and sees an innumerable multitude of angels and saints surrounding the throne of God, hears the angels declaring the worthiness of the Lamb “to receive power and wealth and wisdom and strength and honor and glory and praise!” ….5:13 continues: “Then I heard every creature in heavens an don earth and under the earth and on the sea, and all that is in them, saying: “To him who sits on the throne and to the Lamb be praise and honor and glory and power, for ever and ever!’”

This portrays the worsh i ping Church as part of a heavenly congregation that includes the patriarchs and prophets, saints and angels, and that the bibl ical writers describe varieties of sounds that “should exceed the scope of taste.” So Kossler concludes, “Worship is not a private practice. It is the chief work of heaven and the duty of every creature.” Accordingly, he offers three suggestions. 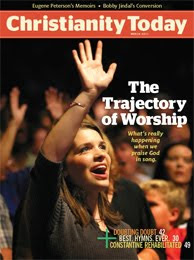 While I agree with the author's excellent article, I would add that in view of the ongoing vicarious humanity of Christ and the Trinitarian nature of worship, we do well to continually emphasize another crucial aspect of the relationship between the heavenly worship and our earthly worship—one if overlooked only adds to a quarrelsome striving for the ‘perfect’ worship music/lyric, liturgy or prayer.

J.B. Torrance (in Worship, Community & the Triune God of Grace) and T.F. Torrance (in The Mediation of Christ, and elsewhere) remind us of the unique self-presentation of the only Worthy One, the Lamb of God before the Father. The risen, ascended Christ alone was and is the perfect living Sacrifice, Offering and Response to the love of the Father. He alone is worthy to worship and present himself at the Father’s throne, and it is by his sacrifice we are redeemed.

The epistles of Romans and Hebrews point to the relationship of the Church on earth and the eternal intercession of Christ at the right hand of God where saints and angels give praise and thanks, and the scriptures indicate it is through the power and working of the Holy Spirit that we participate in that heavenly worship. It is by the Spirit we participate in and are included in Christ our Mediator’s ongoing intercession and prayers—as well as in the Son’s ongoing praise and thanks to the Father. In Royal Priesthood T.F.T. describes the Lamb as being upon the altar throne, undoing our sin and guilt, and the saints as beneath the altar. He describes our earthy participation as being a faint echo that is incomplete but which points to that which is beyond it.

…the liturgy of the Church on earth is essentially imperfect and fragmentary. All we get here are broken snatches of the earthly liturgy as it echoes the heavenly. The heavenly liturgy is described as the New Song, which no one knows but the redeemed who have passed over to the other side….[and] on this side it is impossible to score that New Song….

Like St. John in the Spirit on the Lord’s Day, we lift up our hearts above and beyond the liturgy of earth and in breathtaking wonder and in indescribable joy echo the heavenly Song of the Lamb. As this fragmentary and imperfect echo of the perfect liturgy and music of heaven the sacramental liturgy of the Church is at once an anticipation of the future, and yet an interim measure that will pass away (p. 96).