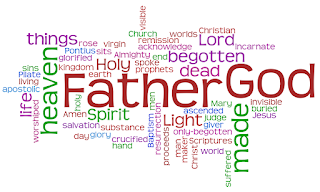 Greek philosophy
As Torrance notes (p2), the Nicene Creed represents the work of the Greek church fathers in reaching careful expression of crucial points in the Gospel where it had been seriously misunderstood and distorted under the influence of Greek philosophy. This philosophy viewed God as one, perfect, unchangeable and totally unlike physical beings. Such a perfect, unchanging God, they reasoned, would have nothing to do with physical matter, including with flawed human beings.

The Arian Controversy
Influenced by this Greek (Hellenized) philosophical view of  God, some Christians began to speculate that the one supreme God who must remain aloof from the changing world of matter, created angels, and that these angels were the ones who created and then interacted with the physical world. In like manner, they reasoned that Jesus Christ (who came into the world of matter and took on flesh) must also be a created intermediary. This view was taught by Arius, an influential Christian elder in Alexandria, Egypt.

However, Alexander, the bishop of Alexandria, vehemently disagreed with Ariius' view. He tried to remove Arius from his church office, but the people protested. In order to try to settle the Arian controversy, the Roman Emperor Constantine called a church council in the year A.D. 325 at the city of Nicea, in Asia Minor near Constantinople. About 300 bishops came, almost all from the East.

The Nicene Council
The council debated the nature of God and Jesus Christ. Most of the bishops rejected Arius' idea that Jesus was a created being. They believed that when they worshiped Jesus, they were worshiping God. They believed they were saved by God, not by a created being. In short, they were convinced that Scripture declares that Jesus Christ is God. To affirm this belief, they wrote the Nicene Creed. It declares that Jesus Christ is, "God of God, light of light, true God of true God, begotten, not made, of one substance with the Father." The last portion had particularly significance in the council. "Of one substance" translates the one Greek word homoousios, which means of the same substance or essence - of one being. The Nicene Creed thus declares that what God is in his essence, the Son of God is too. We'll have much more to say about this word in later posts in this series.

Council of Constantinople
Eventually, Theodosius (the new Roman emperor), called a second council. It was held in Constantinople in 381. This council affirmed the Nicene Council viewpoint that Jesus is fully divine, eternal, not created. Moreover, the council accepted the full divinity of the Holy Spirit, teaching that the Father is God, the Son is God, and the Holy Spirit is God, yet there is only one God - one God in three Persons. They felt compelled by Scripture to come to this conclusion.

The result of these two councils (with some later editing) is the following creed, known as the Nicene-Constantinopolitan Creed, but often referred to by the shorter name, the Nicene Creed.


We believe in one God the Father, the Almighty, creator of heaven and earth, and of all that is, seen and unseen.

We believe in one Lord, Jesus Christ, the only Son of God, eternally begotten of the Father, God from God, Light from Light, true God from true God, begotten, not made, of one being with the Father. Through him all things were made. For us men and for our salvation he came down from heaven; by the power of the Holy Spirit he became incarnate from the Virgin Mary, and was made man. For our sake he was crucified under Pontius Pilate; he suffered death and was buried. On the third day he rose again in accordance with the Scriptures; he ascended into heaven and is seated at the right hand of the Father. He will come again in glory to judge the living and the dead, and his kingdom will have no end.

We believe in the Holy Spirit, the Lord, the giver of life, who proceeds from the Father (and the Son). With the Father and the Son he is worshipped and glorified. He has spoken through the Prophets.

We believe in one, holy, catholic and apostolic Church. We acknowledge one baptism for the forgiveness of sins. We look for the resurrection of the dead, and the life of the world to come. Amen.

(Note: this translation is by the International Consultation on English Texts, 1975, published in appendix A of Gerald Bray, Creeds, Councils and Christ, InterVarsity Press, 1984.)

In posts to follow in this series, we'll unpack the Nicene Creed, noting its essential points in defense of the Trinitarian, incarnational faith which is grounded in the Gospel given by Jesus, taught by his Apostles, and recorded in Holy Scripture. There is much for us to learn. It will be a source of much rejoicing!
Welcome to The Surprising God where Grace Communion Seminary (GCS) on behalf of Grace Communion International (GCI) explores the content and application of Incarnational Trinitarian Theology. Except as noted, posts are from GCS faculty member Ted Johnston. Though GCS and GCI embrace the theology expounded here, posts are not official statements of doctrine. You may comment on posts where they are reposted on GCS's two Facebook groups: Trinitarian Theology Forum and Trinitarian Ministry and Worship.