Showing posts from August, 2011
Show all

Will all be saved?

[Updated 8/27/2019] Do Grace Communion Seminary and Grace Communion International (sponsors of this blog) teach a doctrine of universalism? The answer is no---both are in agreement with the teaching on this topic from Trinitarian theologian Thomas F. (TF) Torrance who notes that, "Whether all men will as a matter of fact  be saved or not, in the nature of the case, cannot be known" ( Scottish Journal of Theology 2 [1949] 310-18, quoted in In the End, God,  by John A.T. Robinson, Wipf and Stock: 2011, p. 148). Torrance offers two reasons for this assertion: 1) The irrational mystery of evil. 2) The truth that God gives each person the freedom to say "no" to him---potentially forever. Both reasons must be seen in the light of the deeper truth of God's election , which, in Torrance's view  TF Torrance expresses the universal action of God's grace in such a way that, far from dissolving the personal elements of choice and decision, it establishes
Read more 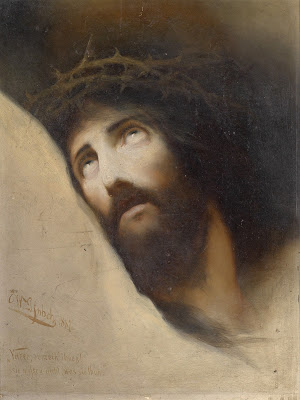 Are there conditions that a person must meet in order for God to forgive them? Many answer yes , often making two claims: That God, being holy, stores up wrath against the sinner (here they typically cite Rom 2:5). Moreover, God will not  let go of this wrath, through forgiveness,  until the sinner repents (which to them, includes asking God for his forgiveness). That God will not forgive the sinner until they forgive those who have sinned against them (here they typically cite Jesus' words in Mat 6:14-15 and 18:21-35). I address the second claim in another post , so I'll focus here on the first. What I understand Scripture to teach (when read in the light of the gospel of grace), is that God's forgiveness of all humanity is unconditional and, moreover, has  already been granted. (public domain, Wikimedia Commons) First, let's note a disconcerting paradox: Those who claim that God will not forgive us until we repent, often claim that we should forgive thos
Read more

The journey with Jesus

- 8/11/2011
In a recent You're Included   video ,  Dr. Alan Torrance beautifully and profoundly summarizes the Christian life as, "our sharing by the Spirit in the Incarnate Son's communion with the Father." As noted frequently in this blog, the Son of God, our Creator and Sustainer, united himself to all humanity by adding humanity to his divinity in the person of the God-man, Jesus Christ. Though not all people know of and thus personally experience this established union with Jesus, Christians do, and through the Holy Spirit they share actively in the Son's communion with his Father. Is their sharing perfect? No. Christians, like all human beings, are a work in progress. Therefore,I think it's helpful to think of this union leading to communion as a journey with Jesus . As I study Jesus' earthly life in Scripture, I see the journey as consisting of three basic steps (or, better yet, patterns of being and doing) that are grounded in and expressive of God's
Read more

This post is part 2 of a series exploring The Nicene-Constantinopolitan Creed (commonly called the Nicene Creed). For other parts, click on the corresponding number:  1 ,  3 ,  4 , 5 ,  6 , 7 , 8 , 9 ,  10 , 11 ,  12 ,  13 . This historic, orthodox Creed begins with a simple, yet profound assertion:          We believe...  The Creed defines the content of this belief in a way that has stood the test of time, being embraced by Christians of nearly every denominational stripe for over 1600 years! According to Athanasius, who was an influential delegate at Nicaea, the Creed sets forth "the divine and apostolic faith" (quoted in  The Trinitarian Faith by T.F. Torrance, p15). A ccording to Torrance, it presents the "simple first principles of the Gospel" (p16). The chief concern of the framers of the Creed, including Athanasius (see picture), was to clarify and defend what the Apostles taught concerning the nature of our triune God. The resultant, carefully
Read more
More posts
Welcome to The Surprising God, a blog moderated by Grace Communion Seminary (GCS) faculty member Ted Johnston. Here, Ted and other authors explore incarnational Trinitarian theology on behalf of GCS and its sponsor, Grace Communion International (GCI). Though GCS and GCI both embrace the Nicene faith addressed here, posts on this blog are not official doctrinal statements. Comments on blog posts may be posted on either of GCS's Facebook groups: Trinitarian Theology Forum or Trinitarian Ministry and Worship.