Did God forsake Jesus at the cross? 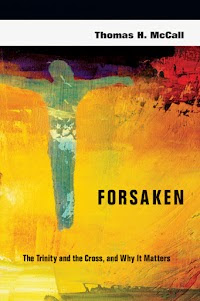 Last time we saw how McCall shows that Jesus' cry of dereliction on the cross ("my God, my God, why have you forsaken me"), cannot be taken as indicating that the Father separated himself from his Son. McCall uses several arguments to debunk this wrong-headed (though popular) notion. In this post we'll look at two. First, McCall argues on the basis of God's own essential (and inseparable) triune nature. He quotes Bruce D. Marshall:


God the Son can be truly Fatherless only if God the Father has genuinely given up whatever is necessary for his paternal relationship with his Son... The person of the Father is inseparable from the act of generation by which he eternally brings forth the Son. Without this act of generation, there would be no person of the Father... Were God the Father to renounce his paternity in the passion of the incarnate Son...the Son would at that moment cease to be brought forth from the Father. If this Son came to be Fatherless, he would himself instantly cease to be. At the same time he would naturally cease to suffer the Father's dereliction, since what is not cannot suffer" (pp34-35).

McCall goes on to note that nothing in Matthew's and Mark's accounts of Jesus' cry of foresakenness on the cross demands the idea of a rupture in the triune relationships. Indeed, those relationships cannot be broken, for it is these relationships that constitute the Trinity, and thus the very being of God.

Second, McCall argues from the biblical text, noting that neither Matthew or Mark give any explanation concerning the meaning of Jesus' cry of dereliction. Also, both record that Jesus made a "loud cry" after the cry of foresakenness (Mat 27:50; Mark 15:37), and neither tell us what that cry was - for that we have to go to John's account where "the last recorded words of Jesus come as a triumphant cry from a man with his head held high: 'It is finished' (John 19:30)" (p37). This cry of triumph is hardly consistent with the idea that Jesus had been abandoned by his Father or that the triune relationship had been severed in any way:


There is no hint here of a severed or even strained relationship. There is no sense here of a Father who has rejected his Son or who has turned his back on him. In fact, it is hard to see how such a view could even be compatible with the last words of Jesus. To the contrary, Jesus prefaces his last words with a sense of deep relational intimacy: Jesus addresses his "Father." And they are words of complete trust; what we see here is an expression of the closest imaginable spiritual communion. "Into your hands I commit my spirit."

The last words of Jesus, as recorded by Luke [23:46], are not words of spiritual separation or of utter abandonment of God. They are not the words of someone who knows that the Father has "turned his face away," nor is it the response of someone who believes that he has been rejected by his Father. Luke's last words of Jesus are an expression of confident trust and glad hope. They stand in contradiction to any broken-Trinity interpretation of the cry of dereliction. They are, however, completely consistent with the traditional understanding that the Father -  when he could have rescued him - abandoned Jesus to this death, on the cross, at the hands of these sinful people, for us and our salvation. But even in this abandonment, he is the beloved Son of his Father. The one abandoned to this awful humiliation and death is the one with whom the Father is "well pleased" (Mat. 3:17; Mark 1:11; Luke 3:22) (pp38-39).