OT law--what is its role for Christians? 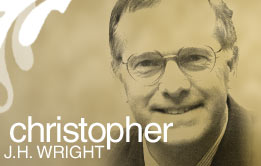 In the Christianity Today article "Learning to Love Leviticus," Christopher J.H. Wright notes that to properly understand the nature and purpose of God's law, we must account for several contextual issues:
Wright then explains the application of the Torah (OT law) to Israel and then to Christians. Here are some illustrative quotes:


God gave Israel his law in order to shape them into a society that would reflect God's character and values in the midst of the nations—what we might call a missional motivation (Lev. 18:3–4; Deut. 4:6–8). The Israelites were to be distinctive by living in God's way, the ways of personal integrity, economic and social justice, and community compassion. The law was not a set of arbitrary rules to keep God happy. It was a way of life, a way of being human, a culture in a particular time and place, to show what a redeemed people under God looks like (p 32).

The point is that on one hand, all of these kinds of laws were intended for Israel's society and not directly for us. They are culturally specific and limited. Yet at the same time, as Paul says, all of the laws were "written for our instruction" and are "useful" for us [see Romans 15:4, 2Tim 3:16-17]. So we should not find ourselves asking, "Which of these laws do I have to obey, and which can I ignore?" Rather, we should ask, "What can I learn from all of these laws about how God wants me to live and how he wants his people and society at large to live?" Not, "What rules do I have to keep?" but rather, "What kind of relationship do I need to cultivate with God and live out among others?" (p33).

Just because we no longer keep these laws literally does not mean they can't teach us anything. We are called to present our bodies as a living sacrifice in the service of God. We are called to offer the sacrifice of praise. We are called to cleanness of life in a corrupt world. In fact, if we are tempted to mock Jewish fastidiousness over kosher food in the kitchen, we might ask if we have any sustained commitment to the moral and spiritual distinctiveness that the New Testament upholds (pp33-34).

Biblical law can function sharply as a paradigm or model for our personal and social ethics in all kinds of areas: economic, familial, political, judicial, sexual, and so on. We are not "keeping it" in a literalist way like a list of rules. But more important, we are not ignoring it in defiance of what Paul says in 2 Timothy 3:16–17. We are studying and using it as guidance, light for the path, in the joyful way of Psalms 1, 19, and 119 (p34).

To those who imagine that "living biblically" means keeping all the rules you can possibly find in the Bible, I think [the apostle Paul] would say, "You haven't understood the first thing about the gospel. The Good News is not, 'Here are the rules, see how many of them you can keep.' " Instead, I believe he would say, "Here is Jesus. See what God has done for you through him" (p34).

There is plenty that we can learn from Old Testament laws that can still usefully guide our ethical and missional thinking and action. The Torah was always intended to do just that. But the heartbeat of Christian life and freedom is not keeping all the rules. Instead, it is living as people whose whole life and character are shaped by God's Word in all its Christ-centered fullness, becoming more like the Christ we trust and follow, and bearing the fruit of God's Spirit (34).