What happened at Pentecost?

- 2/03/2014
On the day of Pentecost following Jesus' crucifixion, death, resurrection and ascension, the Holy Spirit moved with power among Jesus' followers who were gathered for prayer (Acts 1:14; 2:1). Miraculous signs and wonders resulted, including some disciples being enabled to speak to the crowd of festival pilgrims in languages those disciples did not know (Acts 2:2-4). Baffled by this, some of the assembled pilgrims proclaimed that Jesus' followers must be drunk (Acts 2:5-13). In reply, Peter said this:


"...Let me explain this to you; listen carefully to what I say. These men are not drunk, as you suppose. It's only nine in the morning! No, this is what was spoken by the prophet Joel: 'In the last days, God says, I will pour out my Spirit on all people. Your sons and daughters will prophesy, your young men will see visions, your old men will dream dreams'" (Acts 2:14-17). 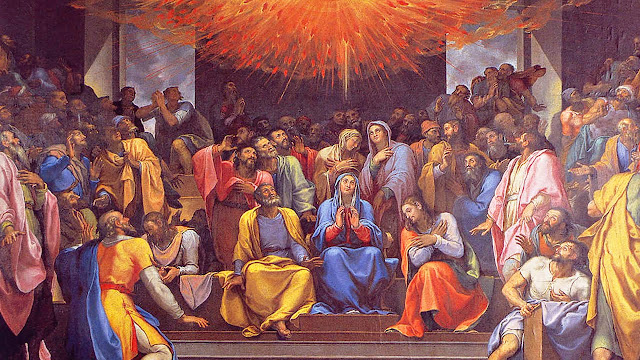 What did Peter mean by indicating that on this day of Pentecost, God, in accord with Joel's prophecy, had poured out his Spirit on all people?

What Peter, the other disciples and the assembled crowd witnessed was a monumental event in salvation history. Joel's prophecy was in line with the Jewish understanding of the coming of the promised Messiah--the one who would pour out the Spirit not just on a few leaders and prophets of Israel but on all people--both Jews and Gentiles. This universal outpouring would be a sign that the "last days"--the age of the Messiah--had dawned.

This outpouring was an important part of a seamless "Christ event" that included Jesus' crucifixion, resurrection and ascension. Through this event, humanity was recreated and renewed to God. Note Irenaeus' comment:


The Holy Spirit, through whom the prophets prophesied, and the fathers learned the things of God, and the righteous were led forth into the way of righteousness; and who in the end of the times was poured out in a new way upon mankind in all the earth, renewing man unto God (Demonstratio 6; SC 62, 39–40).

What occurred on that Pentecost together with the rest of the Christ event was stunning and monumental, affecting all humanity. As Paul wrote, through the Christ event, Jesus became the new (or second) Adam (1Cor. 15:21-22). Objectively speaking, the whole of humanity was re-created--born again and through that event released from its bondage to Satan. And thus we proclaim on this blog the good news that “all are included in Christ's love and life.”

"But wait a minute!" some might object, "I don't see evidence that this universal change to humanity occurred at that time or any time since. How can you say that the Spirit was poured out on all humanity on that day of Pentecost?"

A key here is understanding the distinction that Scripture makes between what is objectively true of all people and what is personally (subjectively) experienced by individuals. For us to be faithful to the whole testimony of Scripture (and the reality of Christ to which it testifies), we must account for both aspects, and understand the role of the Triune God in both.

Dr. Gary Deddo of GCI addresses the subjective aspect in his article, “Jesus’ Acceptance”. What is true objectively of all people (their acceptance by God in Christ as evidenced at Pentecost in the pouring out of the Spirit on all humanity), must be realized personally (subjectively) for it to become a personal reality.

This subjective outworking of the objective reality is what Jesus is now doing through the Holy Spirit, one person at a time (sometimes one family or group at a time). The Spirit brings individual persons to what the ancients referred to as “illumination” (having one’s "mind opened”). As the person responds in faith to this converting work of the Spirit, they are enabled to “see” (personally experience or appropriate) what had been true of them objectively all along. As the song says, they had been blind, but now they see!

The glorious truth of Pentecost is that with the crucifixion, resurrection and ascension of Jesus and his outpouring of the Spirit, God is present to and with humanity in a new way--a transforming, converting way; a way now open to all people. In Christ, all have a new Father--a new home if you will. And as they come home, through Jesus to God their Father, they will experience that reality and in doing so will personally/subjectively receive what was theirs all along.

As to the question of what happened to all humanity at  Pentecost, we see the evidence only “in a mirror darkly.” The results of this stunning re-creation of the human family are now only dimly, partially seen—indeed the new life of humanity is “hidden with Christ in God” (Col 3:3).

Note also that this re-creation of all humanity in Christ, reaches from the point of the Jesus event backward in time and forward in time to encompass all of humanity. How can this be so? Because all time is in the possession of Christ, its Creator, Sustainer and Lord. He is the Source of all humanity (the "new Adam") and the Source of the rest of the cosmos as well. In him, the created order has been recreated, though the full impact of that recreation is yet to be revealed (seen), and, indeed, will not be until the Lord’s “coming”(parousia, meaning “appearing”—see 1 Thessalonians 2:19; 3:13; 4:15; 5:23; 2 Thessalonians 2:1, 8, 9; James 5:7, 8; 2 Peter 1:16; 3:4, 12; 1 John 2:28).

Some have argued that the stunning advance of humanity on many fronts since Pentecost shows how much has changed in the “re-wiring” of humanity accomplished in Jesus. Perhaps there is some evidence of this, and we should note that from that point forward, the gospel has spread throughout the world, bringing about many positive changes. However, Peter’s main point in Acts 2 in referring to the outpouring of the Spirit, was that Jesus is the promised Messiah—he is the one prophesied to pour out the Spirit of the living God on all people—an event the crowd was witnessing then and there.

An issue related to this topic is the nature and mission of the church. If the Spirit has been poured out on all flesh, how is the church distinct from the whole of humanity? Gary Deddo addresses this question in a paper titled, The Holy Spirit in the Theology of T.F. Torrance:


The church...is the immediate sphere of the Spirit’s operation, but the world is nevertheless the mediate sphere. The church is the community where reconciliation is intensively actualized through the Spirit. But this is done “in order that it may be fulfilled extensively in all mankind and creation.” The church is “the new humanity within the world, the provisional manifestation of the new creation within the old." [Quoted from Torrance's The School of Faith].

Those outside the church are to be regarded in the sphere where this reconciliation has not yet been subjectively actualized but is nevertheless objectively accomplished for them in Jesus Christ. In Torrance’s view “no one has being apart from Christ” for “that is the decisive, final thing about the whole Incarnation including the death of Christ, that it affects all men, indeed the whole of creation, for the whole of creation is now put on a new basis with God, the basis of a Love that does not withhold itself but only overflows in pure unending Love."

Consequently the Spirit empowers the church for a mission beyond itself since all humanity is related to Christ by virtue of creation and incarnation. Torrance notes that “we have to take seriously the fact that the Spirit was poured out on 'all flesh' and operates on 'all flesh.'"

May we, like the Apostle Peter and like T.F. Torrance and other faithful ministers of Christ, proclaim that outpouring--that miracle, that hope--to as many as we can!
___________

For a previous post related to this topic, click here.
Welcome to The Surprising God, a blog moderated by Grace Communion Seminary (GCS) faculty member Ted Johnston. Here, Ted and other authors explore incarnational Trinitarian theology on behalf of GCS and its sponsor, Grace Communion International (GCI). Though GCS and GCI both embrace the Nicene faith addressed here, posts on this blog are not official doctrinal statements. Comments on blog posts may be posted on either of GCS's Facebook groups: Trinitarian Theology Forum or Trinitarian Ministry and Worship.