Showing posts from April, 2014
Show all

Ministry is a gift

- April 20, 2014
The Relational Pastor, part 9 For other posts in this series, click on a number:  1 , 2 , 3 , 4 , 5 , 6 , 7 , 8 , 10 , 11 , 12 , 13 , 14 ,  15 . This post, the ninth in a series exploring  The Relational Pastor , looks at Andrew Root's concerns about ministry models in general, and one known as "incarnational ministry" in particular. Those who advocate incarnational ministry speak of "incarnating ourselves into people's lives," and "being Jesus with skin on." Though these concepts are admirable in many ways, they reflect (likely unwittingly) a common, though flawed concept that the incarnation was a  temporary  strategy--a means  God used toward a particular end , namely, our salvation. But the incarnation was no mere strategy and certainly was not temporary. The reality is that the Son of God permanently added our humanity to his divinity, becoming Immanuel (God with us, Matt 1:23) forever. The personal union thus forged between God
Read more

The Relational Pastor, part 8 For other posts in this series, click on a number: 1 , 2 , 3 , 4 , 5 , 6 , 7 , 9 , 10 , 11 ,  12 , 13 , 14 ,  15 . In part 7  of this series exploring  The Relational Pastor   by Andrew Root, we noted that Jesus' place sharing ministry is the outworking of his indwelling of humanity. This incarnational ministry of Jesus then points to our own, for we are called as Christians to participate with Jesus in his ongoing place sharing ministry. Our participation is fundamentally relational, because the triune God, who is relational, has created us in his relational image. As Root likes to say, "We are our relationships." It follows that relationship is the principal "location" where Jesus' ministry and thus ours occurs. This being so, a key characteristic of effective pastors is the personal quality that we refer to as  empathy. Here is Root's definition: [Empathy is] the experience of feeling (often involuntarily) the
Read more

Place sharing: the outworking of indwelling 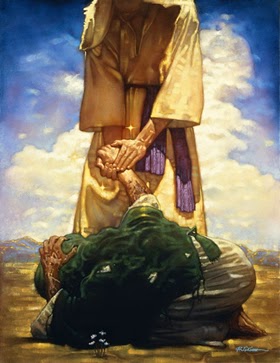 The Relational Pastor, part 7 For other posts in this series, click on a number: 1 , 2 , 3 , 4 , 5 , 6 , 8 , 9 , 10 , 11 ,  12 , 13 , 14 ,  15 . In part 6 of this series exploring The Relational Pastor , we concluded with Andrew Root's observation that ministry finds its "lifeblood" in the reality of personhood. Ministry is life-giving when it is authentic participation in the place sharing ministry of Jesus, who as our High Priest, is relating to human persons as we truly are: beings-in-relationship . Jesus' indwelling, place sharing ministry is powerfully illustrated by  Ron DiCianni in this evocative painting entitled  The Leper. Root expands on this important concept by noting that place sharing is the outworking of indwelling . In explaining what this means, he asks a rhetorical question: "How could there possibly be something called ministry that violates or ignores the dynamic spiritual mystery of personal indwelling?" In answering, Root
Read more
More posts
Welcome to The Surprising God where Grace Communion Seminary (GCS) on behalf of Grace Communion International (GCI) explores the content and application of Incarnational Trinitarian Theology. Except as noted, posts are from GCS faculty member Ted Johnston. Though GCS and GCI embrace what is expounded here, blog posts are not official doctrinal statements. To comment on what is posted here, go to GCS's two Facebook groups (Trinitarian Theology Forum and Trinitarian Ministry and Worship) where many of the posts here are re-posted.