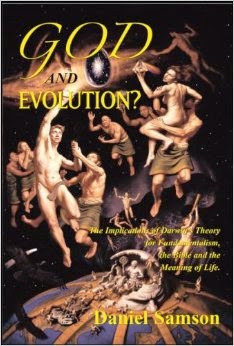 Before returning to our exploration of Mapping the Origins Debate, I thought it would be helpful to make mention of another book on the topic, God and Evolution (the implications of Darwin's theory for fundamentalism, the Bible and the meaning of life). This book was written by Daniel Samson who years ago was a pastor in the Worldwide Church of God (WCG) -- the predecessor of Grace Communion International (GCI). Daniel makes an in-depth case for theistic evolution, addressing objections from Christian fundamentalists who embrace strict creationist origins models.

Daniel's book provides a helpful, detailed and generally up-to-date review of the scientific evidence for evolution (the book was published in 2006). I recommend the book for its depth and clarity. Even if you disagree with his conclusions, it will help you understand the relevant issues that must be addressed by any serious student of the topic.

During much of his time as a WCG pastor, Daniel embraced WCG's version of Christian fundamentalism (a worldview rejected by WCG leadership in the 1990s, leading eventually to the renaming of the denomination). After a long period of in-depth study of evolutionary science and related topics, Daniel rejected creationist models of origins (both the young earth and old earth models -- WCG had embraced an old earth model relying on the so-called "gap theory"). Instead of creationism, Daniel embraced theistic evolution -- the idea that God created using evolution as his tool. Here are a few representative quotations from his book in which he comments on the creationist views held by most Christian fundamentalists (including himself in the first comment):


Our paradigm of creationism and insistence on a literal reading of the book of Genesis prevented us from grasping the salient points of evolutionary theory. Everyone of my fundamentalist friends was convinced that the scientists were simply in error -- deceived by the devil into accepting the bogus idea that would undermine the concept of a literal view of creation by fiat around 6,000 to 12,000 years ago (or re-creation, for gap theory enthusiasts). Anti-evolutionary thinking was the party line in our church and it was accepted without question by almost everyone.

For fundamentalists, it is difficult to be objective about human descent from apelike ancestors since it requires the slaughter of a sacred cow -- the literal reading of the book of Genesis. But it takes moral fiber and integrity to face the issues... Creationists' insistence that evolution is "only a theory" is a protective psychological mechanism that allows them to dismiss Darwin's ideas without careful investigation; it allows them to hold tightly to their erroneous conception of reality.

In his book, Samson presents a detailed analysis of the scientific evidence for evolution and addresses ways in which Christians can harmonize that evidence with the biblical record through embracing a theistic evolutionary model of origins. His personal conclusion is that, "It appears certain evolution is the process by which the Creator brought into being time and space, stars and galaxies, solar systems and planets, life and consciousness."

On this blog, we examine the nature of the triune God, who in the mystery and wisdom of his tri-personal council determined to become what he had not been before -- Creator. The Father, Son and Spirit did not create out any lack in their triune life. They had no "need" for a creation. However, in love, and for love, they sought to create "another" -- a cosmos that they would bring into their divine communion -- a cosmos with which to share their love and life. The crowning achievement of that creation is humanity -- humankind created in God's own image.

Understanding the triune nature of God, it should come as no surprise to us that the Father, Son and Spirit, in their divine freedom, would grant to the creation a wondrous freedom to evolve (change, grow, develop). In creating and then facilitating/allowing evolution to progress, God did not "check out" (he is no deistic God -- "in him," we truly do, "live and move and have our being"). However, God did permit the cosmos to progress, in freedom, through evolutionary processes that have occurred over very long periods of time. Though those processes can look, superficially, random and purposeless, God, the author of evolution, has for the cosmos of his creation, a great purpose (telos). That purpose is fullness of union and communion with him.

God created time and space as the "place" in which evolution would progress toward that end. God has not gone away. He is sovereign over the evolutionary process, yet allows it to progress in freedom. How has evolution progressed over the many aeons of time? The records we find in the "book of nature" tell us -- God has given humanity the intelligence to dig out that evidence and come to understand it. Through scientific investigation, our understanding of the book of nature (including what is learned through the sciences of geology, paleontology, genetics, etc.) has grown exponentially over the last several decades.

As Christians, we need not fear the scientific evidence -- and we must not bury our heads in the sand, fearing the evidence. Evolution is no threat to God and no threat to his written Word to us, the Holy Bible, rightly understood. There is, of course, much to study here and Samson's book is a helpful study guide. Even if you do not agree with his conclusions, his presentation of the scientific evidence along with his summary of related issues, are thorough and easy to understand.

For additional information from GCI on the topic of theistic evolution, click here.
Welcome to The Surprising God where Grace Communion Seminary (GCS) on behalf of Grace Communion International (GCI) explores incarnational Trinitarian theology. Except as otherwise noted, posts here are from GCS faculty member Ted Johnston. Though GCS and GCI embrace the theology addressed here, blog posts are not official doctrinal statements. Comments on blog posts may be posted on either of GCS's Facebook groups: Trinitarian Theology Forum and Trinitarian Ministry and Worship.