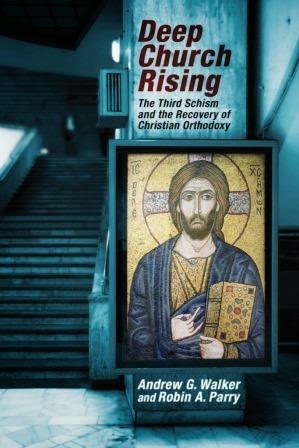 Subtitled The Third Schism and the Recovery of Christian Orthodoxy, the book Deep Church Rising seeks to counter an ongoing movement that takes some churches away from key tenets of Christian orthodoxy toward a faith its proponents deemed more in step with modernity/post-modernity. Walker and Parry speak out against this movement (which they refer to as the church's "third schism"), calling for a return to "deep church"--the recovery of the historic, orthodox Christian faith (what they refer to as "the tradition").

For the authors of Deep Church Rising, the way forward in this return includes both looking back to recover critical elements of the historic Christian tradition and forward to imagine how that tradition can be faithfully practiced within contemporary cultural contexts.

In looking back, Walker and Parry call for a recapturing of the church's ancient Trinitarian, Christ-centered theological vision--one very much in keeping with what is advocated in this blog. This does not mean, however, that Surprising God readers will agree with all conclusions in Deep Church Rising. Nevertheless, a review of the book is well worth the time for those interested in seeing an incarnational, Trinitarian theological "turn" within the greater Body of Christ.

As the authors note, one of the mistakes made by churches in modernity was setting "tradition up in conflict with the Word or with the Spirit" (p. xi). This mistake was (and still is) common within some fundamentalist, ultra-conservative evangelical, and liberal church traditions that dismiss tradition as being the "dead works of men" (p. xi). But in the view of the authors, tradition is not dead at all--it's a living and thus vital aspect of the ongoing life of the church--part of an essential "threefold cord" that entwines tradition with the Word (Scripture) and the Spirit.

Deep Church Rising begins with a helpful review of Christian history, including the two great schisms of antiquity. The first (called the Great Schism) came to a head in A.D. 1054, dividing the Eastern Church from the Western Church. There were many factors leading to the split, including dueling doctrines concerning the procession of the Holy Spirit. Though there have been several efforts down the centuries to heal the rift, those efforts have failed (though efforts in recent decades have yielded some progress).

The second schism, which occurred in the 16th century, split the Western Church into Roman Catholic and various Protestant offshoots. Though positive reforms flowed from what typically is referred to as the Protestant Reformation, the seeds planted in that schismatic movement have led to multiple schisms within Protestantism itself:


The Reformation became reformation ad nauseum, and modern denominationalism was born. This was inevitable while the reformers saw Protestantism as replacing the authority of the Pope with authority of the Bible. It was also the case that now every person was their own "pope" and could--and did--interpret the Bible according to his or her own lights (pp.7-8).

Because Protestant reformers strongly emphasized Scripture standing alone outside of tradition, the seeds of a third great schism had been planted. The journey from the second to this unfolding third schism has been a long one (some 500 years!), during which multiple factors (often intertwined) have been at work. Not the least of these factors is the Enlightenment of the 17th through the 18th centuries, which tore much of Western culture away from not only the ancient Christian tradition but also away from Scripture itself--thus planting the seeds of the modern (now largely post-modern), secular age with a worldview that emphasizes rationalism (including anti-supernaturalism) and individualism.

Various Christian authors and leaders in our day seek to make Christianity "intelligible to modern people" by presenting "the gospel in ways that connect with modern culture" (p.11). In many respects, this is a laudable goal and tactic. However, some (perhaps many) of these reform efforts have lost touch with the gospel itself. The unfortunate result is a growing "third schism" within Christianity that is separating at least parts of the church from its historic, orthodox Christian moorings.

As a corrective to this third schism, Walker and Parry advocate a return to those historic moorings--a return to deep church, meaning a church deeply connected to the orthodox, historic Christian faith with its enduring, gospel-centered tradition. C.S. Lewis referred to this as "deep church" (and the better known term, "mere Christianity"). Deep church is grounded in "the apostolic faith of the New Testament interpreted and handed on by the fathers of the early church" (p.13). This "common tradition...pre-existed the divisions of Christendom, and, as far as [C.S. Lewis] was concerned, remained the deep structure of the [authentic] Christian faith" (p.13).

A move toward "deep church" is thus a move toward recapturing the Christian tradition (in the classic sense of that term). Those reading this from some conservative evangelical and liberal Christian perspectives may bristle at this (given the negative take on tradition noted above). However, what the authors of Deep Church Rising advocate is not a return to "dead tradition," but to the historic faith of the ancient church--a tradition that is both a historical and existential reality. Note their comment on the historical reality:


The historical reality [of the Christian tradition] rests upon two givens: first, the very fact of God's self-revelation to the world in the person of his Son; and, second, the institution by the Son of his church. This historicity--of revelation and institution--has bequeathed to the people of God a living memory of what Christ has wrought on the cross for our salvation, and what he has continued to do in time through the operation  of the Holy Spirit in the church (p.14).


To become part of deep church we have to experience God not only historically and intellectually but also existentially.. open to the presence and indwelling of the persons of the Trinity....

Church communities that have accessed the living memory of the common tradition but are not sharing in the life of the triune God are mere antiquarians rummaging around in the tradition like children looking for hidden treasures in a dusty attic... Deep church is only truly operative when the mediated revelation of God's Son and the historical givenness of the ekklesia are conjoined with the immediate presence of the Spirit (p.15).

According to Walker and Parry, the movement toward deep church "is an ecclesiological and missiological imperative" (p.16). As we proceed in this series, we'll learn more about why they think this is so.

To watch a GCI interview with Robin Parry, click here. And for a short video promoting Deep Church Rising, watch this: