- 8/28/2016
This post is the first in a series of five posts that look at what Thomas F. Torrance (TFT) has to say in The Christian Frame of Mind concerning the integration of science and theology in light of the Incarnation of the Word of God. For other posts in the series, click a number: 2, 3, 4, 5.

In keeping with the biblical Nicene faith, TFT affirms that while remaining fully divine, the eternal Son of God, via the Incarnation, added our humanity to his divinity. But what sort of humanity? Drawing on Scripture as understood by the patristic fathers, TFT asserts that the Son of God assumed a "full and complete human mind"---the same one we have, which in The Trinitarian Faith TFT refers to as, "the defiled nature of man" (p. 153).

This truth is vital to understand, because it is in assuming our humanity in its corrupt state and then uniting it with his perfect and perfecting divinity, that the Son of God brings us the healing we so desperately need, but are unable to achieve for ourselves. Torrance comments:


Through his incarnation, the Son of God has made himself one with us as we are, and indeed made himself what we are, thereby not only making our nature his own but taking on himself our lost condition subject to condemnation and death, all in order that he might substitute himself in our place, discharge our debt, and offer himself in atoning sacrifice to God on our behalf. Since sin and its judgment have affected the actual nature of death as we experience it, Christ has made our death and fate his own, thereby taking on himself the penalty due to all in death, destroying the power of sin and its stronghold in death, and thus redeeming or rescuing us from its dominion. (The Trinitarian Faith p.157)

As Torrance goes on to note, this understanding that the Son of God assumed our defiled human nature was taught by the early Greek church, a prime example being what Gregory Nazianzen (AD 329-390)---one of the Cappadocian fathers, referred to as "the Theologian"---wrote in his first Letter to Cledonius:


If anyone has put his trust in Christ as a Man without a human mind, he himself is really bereft of mind, and quite unworthy of salvation. For that which he has not assumed he has not healed; but that which is united to his Godhead is also saved. If only half of Adam fell, then that which Christ assumes and saves may be half also; but if the whole of his nature fell, it must be united to the whole nature of him who was begotten, and so be saved as a whole. (quoted by TFT in The Christian Frame of Mind, p. 9, emphasis added)

Gregory's argument that the unassumed is the unredeemed had been put forward earlier by Irenaeus (died c. AD 202), in order to "clarify and deepen the theological grasp of the Gospel in the second century" (p. 9). Indeed, the church (particularly in the East), from early on, believed that in the Incarnation...


...the holy Son of God assumed from the Virgin Mary our fallen human nature, with all its weaknesses, sin and guilt, yet in such a way that instead of sinning himself he brought the judgment of God to bear upon us in the depths of our human nature, redeeming, healing and sanctifying at the same time what he took from us, through his atoning birth, life, death and resurrection. (p. 9) 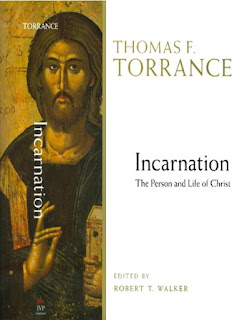 The twin books Incarnation: the Person and Life of Christ and Atonement: the Person and Work of Christ  (both edited by Robert T. Walker) compile TFT's writings and lectures in topical form. In Incarnation, TFT has a great deal to say about the Son of Man's assumption of our fallen human nature. Here is an excerpt:


Are we to think of this flesh which he became as our flesh? Are we to think of it as describing some neutral human nature and existence, or as describing our actual human nature and existence in the bondage and estrangement of humanity fallen from God and under the divine judgment? It was certainly into a state of enmity that the Word penetrated in becoming flesh, into darkness and blindness, that is, into the situation where light and darkness are in conflict and where his own receive him not. There can be no doubt that the New Testament speaks of the flesh of Jesus as the concrete form of our human nature marked by Adam's fall, the human nature which seen from the cross is at enmity with God and needs to be reconciled to God. In becoming flesh the Word penetrated into hostile territory, into our human alienation and estrangement with God....

Now when we listen to the witness of holy scripture here we know we are faced with something we can never fully understand, but it is something that we must seek to understand as far as we can. One thing should be abundantly clear, that if Jesus Christ did not assume our fallen flesh, our fallen humanity, then our fallen humanity is untouched by his work---for 'the unassumed is the unredeemed,' as Gregory Nazianzen put it. Patristic theology, especially as we see it expounded in the great Athanasius, makes a great deal of the fact that he who knew no sin became sin for us, exchanging his riches for our poverty, his perfection for our imperfection, his incorruption for our corruption, his eternal life for our mortality. Thus Christ took from Mary a corruptible and mortal body in order that he might take our sin, judge and condemn it in the flesh, and so assume our human nature as we have it in the fallen world that he might heal, sanctify and redeem it. In that teaching the Greek fathers were closely following the New Testament. If the Word of God did not actually come where we are, and join himself to us and range himself with us where we are in sin and under judgement, how could it be said that Christ really took our place, took our cause upon himself in order to redeem us?

What could we then have to do with him? We stand before God as flesh of sin under God's judgement, and it is into this concrete form of our sin-laden, corruptible and mortal humanity in which we are damned and lost that Christ came, without ceasing to be the holy Son of God. He entered into complete solidarity with us in our sinful existence in order to save us, without becoming himself a sinner. (Incarnation, pp. 61, 62)

But why is this understanding not commonly held today by most Christians in the West? Because, as TFT points out, Latin (western) theology never grasped the profound implications of this key point of Greek (eastern) Patristic teaching. Torrance comments:


This western divergence from the eastern Church can be traced back to [Roman Catholic Pope] Leo the Great's hesitation to accept the fact that in the Incarnation the Son of God took our depraved human nature upon himself, while redeeming, healing and sanctifying it in himself. He held instead that it was not our fallen Adamic nature but some neutral human nature in Christ that became the instrument for his saving work for mankind. The theological consequences of that position were immense, as we can see in the typical approach of Latin theology to the idea of original sin as in the teaching of St. Augustine, in its formulation of a doctrine of atonement, largely in terms of external juridical relations, and of course in the Roman dogmas of "the immaculate conception" and the "assumption of Mary."

...Failure to recognize that the human mind, far from being neutral, is actually estranged and twisted, and thus in need of internal healing, opened the door to a pre-Christian Greek rationalism that has affected not only western theology but all western culture.... (The Christian Frame of Mind, pp. 9,10)

Unfortunately, the Latin misunderstanding of the true nature of Jesus' human nature carried over to Protestant churches. Though helpfully reforming certain errors of Latin theology, the Protestant Reformation carried other errors forward and this is a prime example.

In my view, the Holy Spirit is at work bringing theological renewal to the whole body of Christ, extending across denominational boundaries, resulting in the church receiving a fuller, more accurate understanding of the nature of the Incarnation, and thus a better understanding of salvation and the nature of the human mind, which, in Christ, has been set on a new basis. More about the renewal of the human mind next time.
____________
PS: It occurred to me that the title of this post, "Was Jesus' human nature like ours?" might, inadvertently, suggest that Jesus no longer has a human nature. But that is not the case. Jesus remains, forever, both fully divine and fully human. In other words, the Incarnation is a permanent union of God and humanity in Jesus Christ (two natures in one person). Of course, Jesus in his humanity is now glorified, as we one day shall be, for it is in and by Jesus' vicarious (representative, substitutionary) humanity, united to his divinity, that we have been justified, sanctified and glorified. Hallelujah!