By Ted Johnston - January 11, 2017
This post begins a series looking at Gary Deddo's two-volume book, "Karl Barth's Theology of Relations (Trinitarian, Christological, and Human: Towards an Ethic of the Family)." For other posts in this series, click on a number: 2, 3, 4, 5. 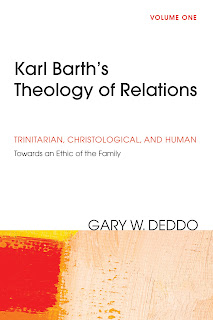 Dr. Deddo's book offers a detailed analysis of what Karl Barth (in his massive work, Church Dogmatics) says concerning the intrinsic relationality of God as Father, Son, and Holy Spirit (Trinitarian theology), God's relationship to us in and through Christ (Christology), and how God's triune relationality is shared by humanity (Trinitarian, Christ-centered anthropology). Gary then shows how Barth applies these theological truths in the arena of ethics (particularly in the context of family). In this way, Gary defines and explores Barth's Trinitarian, Christological and anthropological perspective on human ethics.

To me, having this theologically-grounded, holistic understanding of ethics is critical in our post-modern era when so many ethical questions are being asked, and orthodox theology increasingly is being dismissed as irrelevant or even contrary to a post-modern perspective on ethics. It seems we live in a time like that described in the book of Judges when, "everyone did what was right in his own eyes" (Judges 21:25 ESV)---an ethos that has been re-stated in post-modern terms in Nike's iconic trademark:


To understand Gary's goal and approach in writing, it's helpful to read his thesis statement:


First we hold that the comprehension of Barth's special ethic of the parent-child relationship requires its interpretation in terms of his grounding it in his christological and so trinitarian anthropology. Second, we hold that the key, for Barth, to the interconnection between theology and ethics lies in comprehending the character of the relations in his doctrine of the analogia relationis [analogy of relation]. Third, we intend to show and make explicit the nature, or better the "grammar" of his theology of relations, which arises in his Christology, is central to his special ethics.... Fourth, we contend that, in light of the grammar of personal relations, Barth's special ethic of parents and children, while not beyond criticism, is both relevant and fruitful for the Church's addressing many of the issues facing the contemporary American family. (p. xx)

Some (many?) of Barth's detractors accuse him of being "so heavenly minded that he is of no earthly good." They see his theology as so lofty and dense that it's irrelevant to "practical" matters like ethics. Though I admit Barth is difficult to read, I view it as ironic that people see his theology as having no relevance to ethics. Indeed, it was his pastoral-ethical concerns that were the crucible within which his theology (which is a theology of relations) was forged. His ethical concerns, of course, came to a head during the rise and rule of the Nazi regime in Germany leading up to and including World War II. Barth saw the liberal theology of his day (particularly its form within German Lutheranism) as ethically impotent---of "no earthly good."

Barth's response was not to develop an ethically-directed theology, but to go back to the Source of ethics---the triune God himself, and there answer the question, "Who is God." That question then leads to another: "Who is Christ," and still another: "Who are we, and how then should we live?" To grasp Barth's thought in these areas, requires, as Gary notes, "a synthetic approach" to reading Barth. Those who read him often err by considering sections of Barth's massive Church Dogmatics (abbrevidated hereafter as CD) in isolation from the others. Gary has done us a great favor of looking at the full picture in CD and then synthesizing Barth's essential thought on these key issues.

As noted above, key to Barth's thought throughout CD is the concept of analogia relationis. As Gary notes, "[Barth's] understanding of relations qualifies his entire theology, and so, in turn, his ontology, anthropology and ethics" (p. 4). That being so, Gary exhaustively mines CD in demonstrating how Barth construes those relations. Barth begins by establishing the relationality of God himself---both in his triune being and act, seeing the two as inseparably intertwined. Gary comments:


For Barth, relationality is not an abstract attribute of God's being, Rather, relationality involves being and act, form and content, living and doing. The trinitarian, Christological and human relations require a grasp of the shape of the relations as well as the interactions within the relations. Each qualifies the other. It is on the basis of this large and comprehensive theological understanding that Barth develops his view of the relational nature to humanity in being (ontology) and act (ethics).... [Barth's] ethical treatments always fall within the context of a theological grasp of the act and being of humanity which is placed in the more comprehensive context of the act and being of God in Jesus Christ, which is finally located within the most comprehensive context of the act and being of the Triune God. (p. 4)

Though there is much to explore in unpacking this interconnected chain of thought, we'll end here for now, digging in further as the series continues. But before I close, let me share a relevant summary statement from Gary concerning Barth's view of Christology and our true humanity:


Jesus Christ not only reveals us to God, but humanity as well. Not humanity apart from God, for there is no such thing, but humanity in right relation to God. So at the heart of [Barth's] anthropology is Christology, properly distinguished and related to it. The Christological relation sheds light and gives life to humanity in its relationships, first with God and then with others. Humanity is given its existence in being and act by God through Jesus Christ. In freedom we live out our lives in being and act in correspondence to the essential relations in which we live and move and have our being. (p. 5)

Stay tuned for more next time.
Welcome to The Surprising God where Grace Communion Seminary explores incarnational Trinitarian theology on behalf of Grace Communion International. Though both groups embrace the Nicene faith addressed here, posts on this blog are not official doctrinal statements. Comments that promote respectful discussion are welcomed and may be posted on GCS's Facebook groups: Trinitarian Theology Forum and Trinitarian Worship and Ministry.