This post begins a series exploring the book Fully Human in Christ: The Incarnation as the End of Christian Ethics by Todd Speidell. For other posts in the series, click a number: 2, 3, 4, 5.

Some assert that Thomas F. Torrance failed in his writings to offer a well-developed Christian ethic (particularly a social ethic). Todd Speidell disagrees, giving us in Fully Human in Christ a helpful, carefully researched compendium of TFT's writings on the topic of Christian-theological ethics. 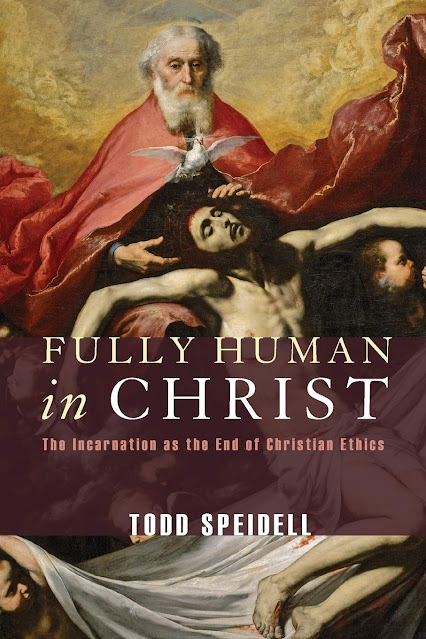 The subtitle of Speidell's book (The Incarnation as the End of Christian Ethics) refers not to the termination of ethics in Christ, but to the fulfillment or goal (telos) thereof. It also is Speidell's way of noting that Christ's vicarious humanity brings to an end all vain attempts to do good or to be good apart from who Christ is and what Christ has done on our behalf and in our place. TFT teaches that Christian ethics is not about self-directed efforts to model our lives after the example of Christ (Christ as mere moral exemplar). Rather, Christian ethics is about real participation, through the Spirit, in Jesus' continuing incarnate life and love. As Speidell notes in his "personal introduction,"

Christ is the ground of Christian ethics.... He abolishes our self-justifying and self-defeating efforts based on moral or religious law in favor of justification by God's grace alone.... Christ negates our futile attempts to be free and independent apart from God... When God assumed our disordered human nature in Christ, he healed us from within the depths of our being. He now permits and commands us to be who we are and are becoming in him....

[This] ethic of grace in Christ speaks of a new reality that goes beyond the rationalizing emphases and tendencies of standard ethical theories. The incarnation of God in Christ, the vicarious humanity of Christ in our place and on our behalf, locates the reality of human reconciliation in God's own being-as-love and unrelenting resolve to redeem his fallen creation. A Christian ethic, then, calls us to follow Christ and participate in him as he continues by his Spirit God's good work on behalf of the world. (p. ix)

As Speidell notes, TFT's Christian ethic is a theological ethic that is "grounded in the incarnation and atonement and understood... as a reconciliation of all things in Christ...." (p. 1). Thus when TFT addresses ethical issues, he approaches them as being essentially theological in nature, and so looks at them through the lens of Jesus--specifically the lens of the vicarious humanity of the incarnate Son of God. If that seems to some as too "other-worldly" or somehow disconnected from the reality of human ethical concerns, it is not, for the Incarnation is very much about God with us in the midst of our ethical mess, suffering with us and bringing his light and truth to bear on our all-too-real ethical problems.

In that regard, Speidell quotes Paul Molnar who comments on the similarities of Barth's Christian ethic with that of TFT:

For Barth and Torrance there is only one possible choice that is enabled and required by the risen Lord himself, and that is to choose him and thus to exercise free obedience.... The essence of faith then is to accept as right what God has done for us and in us. This takes place in and through the Holy Spirit acting for us and in us. While Torrance does not develop his thought on this subject explicitly with respect to Christian ethics in any sense as thoroughly as Barth has, he nonetheless would agree that true human knowledge and action are possible because they find their meaning outside themselves and only in Christ. (p. 5)

Christ's vicarious humanity, his faith(fulness) and obedience, both permits and thus obligates us to be who we are and are becoming in him.... As we cling to Christ, we participate in him and his work as we live in union with him; we all the more, not less, act as God's children. God's grace toward us never renders our participatory obedience superfluous, as is clear throughout Torrance's entire theology and life. (pp. 5, 6)

As this series proceeds, we'll join Speidell in exploring TFT's Christian-theological ethic, noting how it is lived out in and through various ethical situations that are faced today in our world. As we will see, though fundamentally theological in nature, TFT's ethic is not passive. It is one of action--but action that is not apart from Christ, or action that is a mere reflection of Christ. Instead, it is action that is fully with and in Christ.