Whose Parade Do We March In? (a Palm Sunday meditation)

The four Gospels emphasize the sacred period spanning Holy Week plus Easter Sunday. Through the momentous events of those eight days, God's plan to save us in and through Jesus came to a great, climactic crescendo. In the liturgy of the church, Holy Week concludes the season of Lent during which we prepare for Easter by inclining our hearts, minds and bodies to receive anew all that Jesus is, and all that he has done for us through his suffering, death by crucifixion, and burial. Then on Easter Sunday (and the seven weeks that follow) we celebrate Jesus' glorious resurrection.

Holy Week begins with Palm Sunday--a day more consequential than often recognized. Observing what Jesus did that day tells us a great deal concerning who Jesus is, what he values, how he operates, and the nature of the kingdom of God that he came to inaugurate. Palm Sunday thus challenges us to think deeply about these matters. In the liturgy of the palms for Palm Sunday, the Revised Common Lectionary this year (designated Year B) takes us to Mark 11:1-10:

1 As they approached Jerusalem and came to Bethphage and Bethany at the Mount of Olives, Jesus sent two of his disciples, 2 saying to them, “Go to the village ahead of you, and just as you enter it, you will find a colt tied there, which no one has ever ridden. Untie it and bring it here. 3 If anyone asks you, ‘Why are you doing this?’ say, ‘The Lord needs it and will send it back here shortly.’”

4 They went and found a colt outside in the street, tied at a doorway. As they untied it, 5 some people standing there asked, “What are you doing, untying that colt?” 6 They answered as Jesus had told them to, and the people let them go. 7 When they brought the colt to Jesus and threw their cloaks over it, he sat on it. 8 Many people spread their cloaks on the road, while others spread branches they had cut in the fields. 9 Those who went ahead and those who followed shouted, “Hosanna!” “Blessed is he who comes in the name of the Lord!” 10 “Blessed is the coming kingdom of our father David!” “Hosanna in the highest heaven!”

It's important to understand Mark's lead-up to this event. Already, he has recounted three occasions when Jesus told his disciples that he would be rejected, suffer, be executed, then three days later rise from death (Mark 8:31, 9:31, 10:33). Despite hearing these proclamations, Jesus' disciples did not understand the implications. We see this in Mark 10:35-40, where James and John ask Jesus to grant them privileged positions in what they refer to as Jesus' "glory" (Mark 10:37). They have in mind that Jesus, being the hoped-for Messiah, will establish the glory of a kingdom that will overthrow the oppressive kingdom of Rome ruling over the people of God. Jesus' response to James' and John's presumptuous request is to proclaim that they do not understand the kind of kingdom nor the kind of leadership (servant leadership) Jesus represents (Mark 10:42-45).

These discussions about who Jesus is and what is soon to happen, occur over a fairly short period of time as Jesus and his disciples journey south from Galilee, down the Jordan Valley to Jericho, and from there up (west) to Jerusalem (see their journey in the diagram below). They probably were travelling with a caravan of Galilean Jews on pilgrimage to Jerusalem to celebrate the Passover. 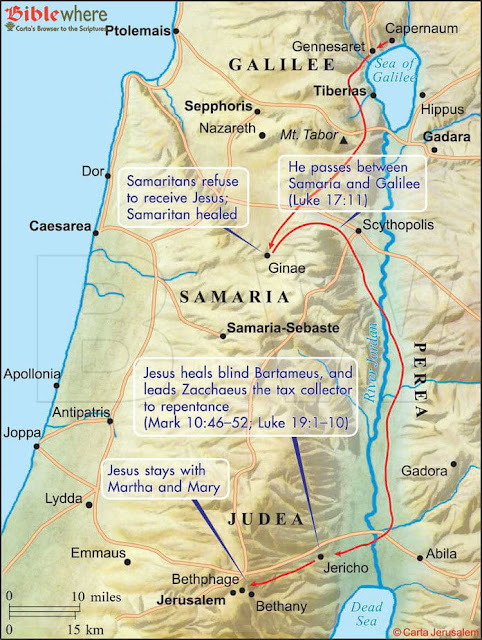 In Mark 11:1, having ascended from Jericho to the outskirts of Jerusalem via the  treacherous Wadi Qilt road, Jesus and his disciples arrive at the village of Bethany southeast of the Mount of Olives, which overlooks the city of Jerusalem. Because Jerusalem would have been packed by hundreds of thousands of pilgrims, Jesus and his followers elect to lodge outside the city. What follows in Mark chapter 11 is the account of Jesus' entrance into Jerusalem on Palm Sunday. The nature of that entrance stands in stark contrast to what his disciples and others might have anticipated. Following up on what Jesus said about his form of leadership--his type of kingship--Jesus now provides a powerful object lesson.

Historical records tell us that Pontius Pilate, who governed Judea (including Jerusalem) on behalf of the Romans, lived in a palace built by Herod in Caesarea on the Mediterranean coast, some 50 miles northwest of Jerusalem. But during the time of the Passover--a festival celebrating the liberation of the Jews from foreign domination--Pilate took up residence in Jerusalem where he could quickly put down any uprisings that might occur with so many Jews gathered in one place.

Perhaps just a few days before Jesus entered Jerusalem from the East, Pilate, travelling from Caesarea, entered Jerusalem from the West. Mark's account tells us of the humble circumstances of Jesus' entrance (riding a donkey!), in marked contrast to how Pilate would have entered--no doubt accompanied by Roman soldiers in full military regalia, Pilate riding at the front on a powerful-looking war horse. The goal of this military demonstration was to intimidate--it was a show of military might. 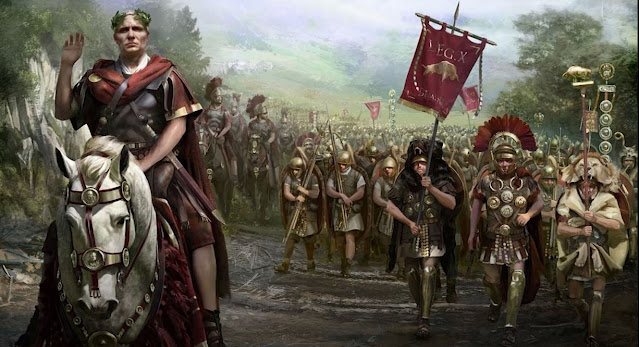 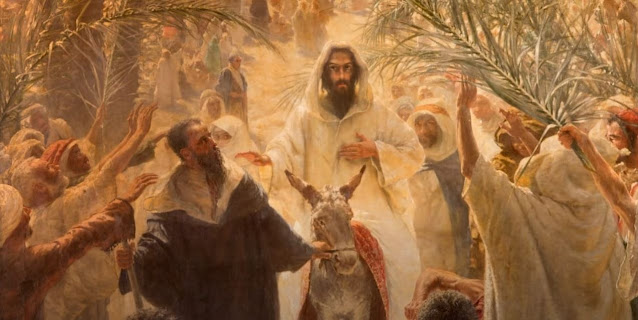 The goal of Jesus' way of entering Jerusalem was to show a humility that contrasted with the ways of Pilate and of Rome. [1] As Matthew notes in his Palm Sunday account, it was also the fulfilment of the rather enigmatic prophecy in Zechariah 9:9:

Rejoice greatly, Daughter Zion! Shout, Daughter Jerusalem! See, your king comes to you, righteous and victorious, lowly and riding on a donkey, on a colt, the foal of a donkey.

This statement falls in a section of Zechariah where God's people are promised deliverance from oppressors (Zech. 9:8), overthrow of military might and establishment of the Messiah's rule, which would bring to God's people lasting peace (Zech. 9:10).

What is being witnessed that Palm Sunday is a victory parade of sorts. As shown in the diagram above, the parade route takes Jesus and his followers from Bethany to Bethpage, then down the west face of the Mount of Olives, past the Garden of Gethsemane, across the Kidron Valley, then through a gate in the wall surrounding Jerusalem right into the temple courts. As stated in Mark 11:11,

Jesus entered Jerusalem and went into the temple courts. He looked around at everything, but since it was already late, he went out to Bethany with the Twelve.

Jesus has arrived--come to deliver God's people, but in a way quite different than the people expected (despite Zechariah's prophecy). Yes, he came in triumph, but not triumph secured by military might. Instead, Jesus came in self-sacrifice. He triumphed over sin, Satan and death, thus securing our salvation by laying down his life on behalf of all people--Jews and Romans alike.

Some of the Jews witnessing this parade celebrated, crying out "hosanna" (meaning, "save now") and exclaiming their hope that Jesus had indeed come to set up the kingdom promised to David. Jesus did come as king of the kingdom--but a very different kind of king, and a very different sort of kingdom than what they were expecting. Exactly who Jesus is, and what he came to do plays out over the rest of Holy Week, followed by the great eighth day--Easter Sunday.

As we go through Holy Week, let us continue in the spirit of Lent (Lent ends with the Saturday of Holy Week)--thinking carefully and deeply about who Jesus is, and what he has done at great cost to himself in order to save us. Let us also think carefully about whose parade we are marching in--what sort of kingdom we stand with and stand for. Do we embrace the way of Jesus, or the way of Pilate? The way of God's Kingdom and his Christ, or the way of the kingdoms of this world and their rulers?

Something to think about.

[1] For more about the contrasts between Pilate's and Jesus' entrances into Jerusalem, here are three resources:

For additional background on the Palm Sunday accounts in the Gospels, click here.