- April 07, 2021
This post begins a series exploring T.F. Torrance in Recollection and Reappraisal by Bruce Ritchie. For other posts in the series, click a number: 2, 3, 4.
Published in 2021 (Wipf & Stock), Ritchie's book is a welcome addition to a body of literature that not only presents Thomas Forsyth (T.F.) Torrance's incarnational Trinitarian theology, but critiques it, making suggestions for clarification and improvement. Both comprehensive and accessible, the book serves as an excellent introduction to T.F.'s theology. It also gives a fascinating, personalized account of Ritchie's journey of theological discovery during his years studying under T.F. at New College, University of Edinburgh in Scotland. As noted by Robert T. Walker in the book's foreword, Ritchie "is one of the last generations to have studied under T.F. Torrance at New college" and "one of Torrance's ablest students" (p. ix). 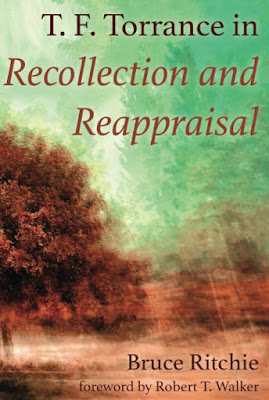 As reflected in the title, the book has two parts: first, Ritchie's recollection of what he learned from Torrance; second, Ritchie's reappraisal of that body of knowledge, including suggestions for clarification and correction. With respect to clarification, Ritchie seeks to find (and perhaps enhance) points of agreement between Westminster Reformed Theology and T.F.'s own Scottish Reformed Theology, particularly with respect to the doctrines of incarnation and atonement. Whether or not Ritchie's efforts are successful will be determined over time as his work undergoes peer evaluation.
One of the strengths of Ritchie's book, particularly in its recollection section and appendices, is what he shares from T.F.'s lectures (Ritchie took copious notes as a student). To those notes he adds fascinating anecdotes about T.F.'s life and teaching, helping the reader understand more fully both what T.F. taught and why (and when) he taught it. I found these anecdotes to be very helpful -- I learned a lot about Torrance I did not previously know.
Chapter 1 provides a brief (though helpful) biography of T.F.'s life, pointing out the major influences that shaped Torrance's teachings. Here is one of Ritchie's summary comments:

For Torrance, Christian theology had to be rooted in faith. Moreover, it had to take place within the community of the church, the body of Christ. For Torrance, the church was the scientific community which provided the individual theologian with context, and with intelligent cross-examination of what he or she wrote... Torrance saw himself a theologian of the universal church, not of one branch of it. Nevertheless, one of his abiding concerns was his Scottish Reformed heritage. (p. 5)

As Ritchie emphasizes throughout the book, a primary concern of T.F.'s theology is to hold together as one the incarnation and atonement. Ritchie comments:

Torrance saw all the actions of God as inter-connected. And he understood all of them to cohere, ultimately, within the person of the Mediator himself. It is in Jesus Christ that incarnation and atonement, being and act, coincide and inter-relate. (p. 7)

T.F.'s emphasis on the importance of Jesus' entire life in accomplishing the atonement of humanity with God causes Ritchie to ask these questions:

Did Torrance pour too much significance into the person of Christ in his incarnation at Bethlehem? Did he leave any need for an atoning death on Calvary? Was everything achieved simply by God becoming man in Christ Had Torrance traded Calvary for Bethlehem? Had he, in effect, replaced the Cross with the Birth? Did his exalted view of Christmas and the nature of the incarnation render Easter unnecessary? (p. 8)

Ritchie answers these questions through the course of the book, beginning with this summary statement:

Although in Christin theology there is a persuasive logic for centering everything in the person of Christ, nevertheless, when we drill deep into the nature of the incarnation, what we discover is that the incarnation itself is centered in, and is dependent upon, the cross and the resurrection. This means that when we ask the question, "what is it that makes the incarnation what it is?," we discover that it is the decisive event of cross and resurrection which actualizes and makes possible the event of incarnation itself.... Whereas normally we understand incarnation as preceding atonement both chronologically and ontologically, the thesis of this book is that Calvary is the presupposition of Bethlehem. Of course, it is also true that Bethlehem is the presupposition of Calvary.... However, ultimately it is the cross which provides the undergirding reality and foundational logic for both. The Son of God was able to be born at Bethlehem because sin was borne at Calvary. (pp. 8-9)

In unpacking this statement, Ritchie goes on to explore how this understanding might serve to resolve some of the tensions that exist between T.F.'s Scottish Reformed Theology and Westminster Reformed Theology. We will learn more about this as the series progresses.

"Bruce Ritchie (BSc, BD, PhD) served thirty years with the Church of Scotland. He has taught Systematic Theology at Zomba Theological College in Malawi and Scottish Church History and Understanding Worship at Highland Theological College, Scotland" (back cover of book).
Welcome to The Surprising God where Grace Communion Seminary (GCS) on behalf of Grace Communion International (GCI) explores the content and application of Incarnational Trinitarian Theology. Except as noted, posts are from GCS faculty member Ted Johnston. Though GCS and GCI embrace the theology expounded here, posts are not official statements of doctrine. You may comment on posts where they are reposted on GCS's two Facebook groups: Trinitarian Theology Forum and Trinitarian Ministry and Worship.