The ancient church chose to end the 50-day-long season of Easter with a Pentecost Sunday celebration. It was on Pentecost (50 days after the Resurrection and 10 days after the Ascension) that the risen, ascended Lord poured out the Holy Spirit in order to form and empower the church for mission.
You will recall that at the Last Supper, Jesus promised his disciples that he would send them "another helper," the Holy Spirit (John 14:16, ESV). Following his resurrection and ascension, our Lord fulfilled that promise on the day of Pentecost. As his disciples huddled in the upper room in Jerusalem praying, the Holy Spirit was poured out on them,

As Robert Webber notes in Ancient-Future Time, "Pentecost plays a crucial role in salvation history" (p. 161). On Pentecost Sunday, the church began, and thus Pentecost is often called the birthday of the church. On Pentecost, Jesus, through the Holy Spirit, established the church, empowered the church and gave it a clearer and deeper understanding both of its Lord and of its participation in the Lord's continuing ministry to the world by the Spirit. By the power of the Spirit. the church is the continuation of the presence of Jesus in and to the world. Webber continues:

The metaphor of "the body of Christ" that became common in the early church captures this incarnational dimension of the church. While Christ is seated at the right hand of the Father, he is also completely present in a mystical way to his body, the church. (p. 162)

Following Pentecost Sunday, the Christian worship (liturgical) calendar provides a 6-month-long season called Ordinary Time (or, sometimes, the season after Pentecost, the season of Pentecost, or Pentecostide). The duration of this season varies from year to year depending on the date of Easter. Though called "Ordinary Time," there is nothing ordinary (mundane) about the season. The word "ordinary" derives from "ordinal" (as in ordinal numbers) and refers to the lectionary practice of assigning a number to each Sunday during Ordinary Time. The numbers are assigned by counting backward from the last Sunday of the liturgical year (always designated week 34). Depending on the length of Ordinary Time in a given year, the first Sunday might be identified in the lectionary as, for example, "Proper 6." Why couple "proper" with the number? It identifies the liturgical practices of certain denominations for that Sunday. Differing propers (with options in brackets) do not indicate differing Scripture readings, only differing liturgical aspects otherwise.

As seen in the diagram below, Ordinary Time focuses on The Story of the People of God---living out what has been learned by rehearsing The Story of Jesus throughout the first half of the liturgical year. 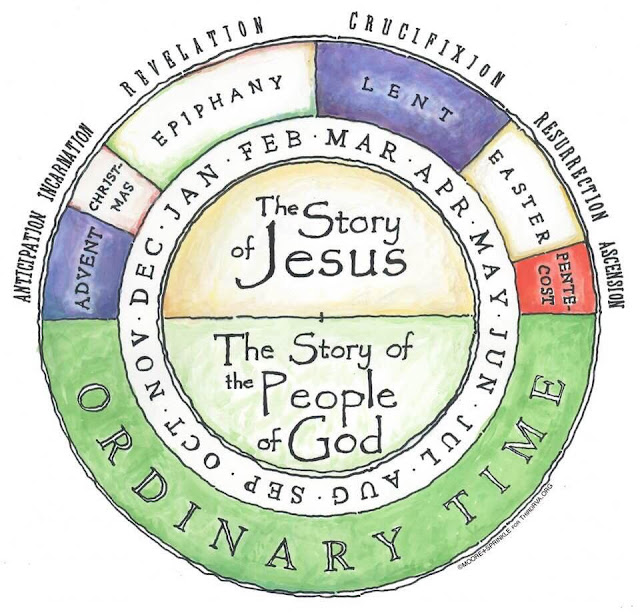 As Robert Webber notes, lectionary lessons during Ordinary Time focus on discipleship---the doing of the truth that is in Jesus, which means the doing of

the meaning of human existence. In this doing, we [the disciples of Jesus] are spiritually formed and shaped by the story that is above all stories, through the remembrance of God's mighty acts of salvation, the experience of God's presence through signs and symbols, and the anticipation of a good end to history. (p. 174)

As seen in the diagram below, Ordinary Time includes three special worship celebrations: Trinity Sunday, All Saints Day and Christ the King Sunday. 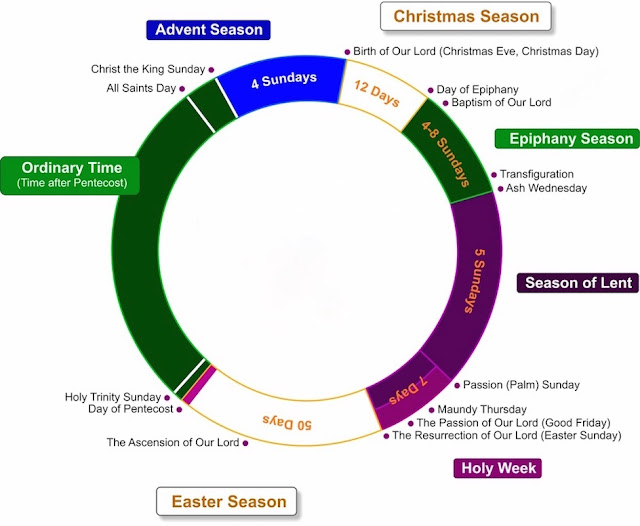 Jesus is declared to be both Messiah and Lord (Acts 2:36, NRSV) and, of course, that is the day of the coming of the Holy Spirit. The Christian church, following the Pentecostal experience, has always been committed to a triune experience and understanding of God. (Webber, p. 175)

All Saints Day falls the weekend following Halloween (a secularized version of All Saints Day). On All Saints Day the church remembers and celebrates "the life and witness of God's people who model a relationship with God for us" (Webber, p. 175). In annually celebrating these notable Christians (some known, some unknown), the church is reminded both of the significant sacrifices made by many Christians, and of the fundamental connectedness of all who follow Jesus (those called "saints" in Acts 9:13 ESV, Acts 26:10 ESV, Romans 8:27 ESV, 1 Corinthians 1:2 ESV).

Christ the King Sunday (also called Reign of Christ Sunday or Feast of the Reign of Christ) provides a fitting segue into Advent, which begins the following Sunday. According to Robert Webber, the celebration of Christ the King Sunday is of modern origin, having been instituted in 1925 to counter the secularization and commercialization in the period leading up to Christmas. Christ the King Sunday is certainly a fitting way to end the liturgical year. By bowing our knees to Christ, "we are inviting the cosmic Lord of history to take up residence in our hearts and lives and to be Lord of life now in this and every moment of our thoughts, feelings and actions" (p. 176).
Here is a concluding comment concerning Ordinary time and the liturgical calendar in general from Laurence Hull Stookey:

Because of what has been made known in Christ, no time can again be regarded as ordinary in the sense of dull or commonplace. The liturgical calendar as a whole exists in large part to remind us that Christ has sanctified all of time, bringing us and the whole of our experience into the orbit of resurrection. What we deem ordinary, God has transformed into extraordinary by his divine grace. (Quoted by Bobby Gross in Living the Christian Year, p. 223)