On Being Human: theological anthropology

This post looks at chapter 1 of the book "On Being Human, Essays in Theological Anthropology" by incarnational, Trinitarian theologian Ray S. Anderson. 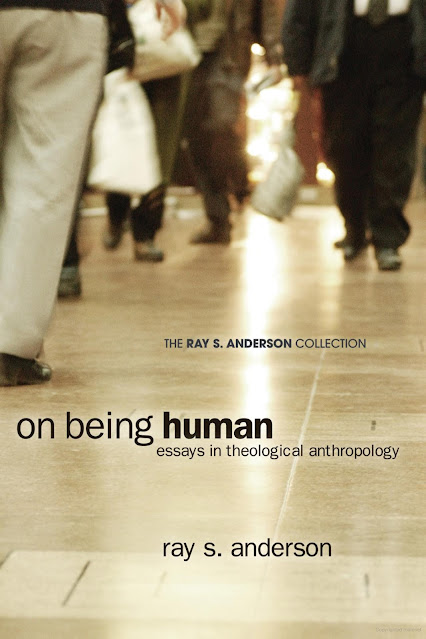 On Being Human compiles essays from Ray S. Anderson written originally for students of psychology and theology at Fuller University. Anderson's goal in writing was "to distinguish between human personality as a cluster of attributes manifested in behavior and the core of the human self as personal being created in the image of God" (vii). In pursuit of that goal, Anderson made the important distinction between personality (which pertains to phenomenology) and personhood (which pertains to ontology). He also sought to show the vital connection between the doctrines of the Trinity (theology) and humanity (anthropology) noting (as does Karl Barth) "that theology has become anthropology since God became man" (viii). On Being Human has three parts: 1) The Form of the Human, 2) Being Human, and 3) Personhood as Actuality and Possibility. Part One begins with chapter one, titled "Toward a Theological Anthropology."

Anderson begins chapter one with a historical analysis that highlights the deficiencies of various non-theological approaches to defining human personhood—definitions that tend to focus on phenomenology (existentialist or naturalistic interpretations of human existence, related to time and chance) instead of theological approaches that focus on ontology (human being—the person as "essence," rather than person as mere historical existence).

Phenomenological approaches have led to viewing humanity in atomistic, individualistic ways, resulting in dualisms "between nature and grace on the one hand, and between nature and experience on the other." This has resulted in a wedge being driven between human being as nature, and human being as object of divine grace. As a consequence, the biblically-grounded ontological definition of human being tended to be replaced by definitions related to theories of personality and behavior.

In general, the ancient (Patristic) church embraced a theological anthropology, understanding that "the human person is created and sustained by the Word and grace of God" (8). This definition of personhood contrasts markedly with mythical anthropologies that posit "a cause-and-effect relationship with the powers and portents in nature" (9), viewing human existence as the outcome of non-historical events in a world where the natural and supernatural interpenetrate, leading to a sense of fatalism and even despair. Similar points can be made concerning philosophical anthropologies that tend toward dualisms—seeing a separation between the human spirit/self (as transcendent) and the human body as subject to the determinism of nature. Anderson comments:

There are, of course, scientific anthropologies, and they too fall short because they tend to be reductionist, excluding "aspects of the human self which cannot be manipulated or controlled under objectifiable conditions" (13). Thus, mythical, philosophical and scientific anthropologies all fall short to one extent or another. Why? Because they suffer from the same deficiency: they are non-theological, and as a result, proceed "from anthropos rather than from theos" (14). Anderson comments:

At best, non-theological anthropologies are symptoms of real humanity, not real humanity itself. To this extent they can genuinely contribute to the knowledge of the human person, but the sum total of them is not the true person. For this reason, says Karl Barth, "in the last resort, there is something tragic in every non-theological anthropology." (14)

Given these problems, how do we proceed?

Given the deficiencies inherent to all non-theological anthropologies, how do we come up with a theologically-sound answer to this basic question: What is a human person? Though this question is fairly simple, its answer is not. As a result, as Anderson notes, theologians have struggled:

If all non-theological anthropologies come to grief over the silence of the gods when viewed from below, can one overcome this difficulty by stepping out of our humanity while we search for clues? Unfortunately not.... If we must begin with what is human in order to discover the nature of the human, and if there is no humanity free from distortion, does this not pose almost unsurmountable difficulties for a theological anthropology? (15)

Yes, the challenge to arrive at a biblically sound theological anthropology presents many challenges—ones that can, indeed, seem unsurmountable. However, Anderson goes into great detail in this book to explain how we can prevail nonetheless. As he notes, in one sense we must begin with the human person, frail and dis-eased though it be. However, at the same time, we must "take into account that the word of God has come to that humanity and in the midst of that humanity, however distorted and perverse it may be, revealed the true form of that which is human" (16).

Look to the humanity of Jesus Christ

The humanity we start with in defining a theological anthropology is the fallen humanity that has come under the radical judgment of God, and so has experienced the the radical grace of God. It is in this context that the original form of humanity is revealed to us. Where do we go to "find" that humanity? Anderson comments:

It is... to the humanity of Jesus Christ the one crucified and judged for all humanity, who bore in his own humanity the radical judgment of God that we turn to as the starting point for theological anthropology. It is in the crucified form of humanity as seen in Jesus Christ that we discover the original form of our humanity. In him the radical form of the original is present; he reveals the true form of humanity not as one who in his innocence kept a distance from our humanity, but a one who took on himself our own humanity. (16)

As Anderson notes, finding true humanity necessitates looking beyond sinful (fallen) human creatureliness, but this cannot be done on a strictly empirical basis—this knowledge comes only by the revelation that comes to us in the person of Jesus Christ who is true human. Anderson explains:

As the incarnate Word of God himself, Jesus took as his own mode of human existence a creaturely form which is common to every other human being.... Sharing fully in human creatureliness and even experiencing the judgment of God against sin in his own death, he was nevertheless personally without sin as an act of defiance and disobedience to God... In his crucifixion, Jesus brackets both sin and creatureliness in the same moment, but in such a way that the connection between creatureliness (human nature) and sin is broken.... The deterministic principle of sin is broken, and grace is revealed as the true order of humanity. (17)

By beginning with the crucified humanity of Christ, we find the true order of humanity as disclosed through the resurrection of Jesus from the dead. The continuity between Jesus of Nazareth as the crucified one and Christ the Lord as the resurrected one is the indispensable foundation of a theological anthropology. (18)

Anderson concludes chapter one with this:

The knowledge of our selves as human beings must be determined by and be correlated with our knowledge of God as the one who reveals himself finally and completely through Jesus Christ. A theological anthropology such as we seek to develop, then, will be radically limited and determined by the dogmatic assumption that Jesus Christ is the incarnate Logos of God, the enfleshed Word, fully human and totally divine in the unity of his person. The humanity of Christ, by which he shares our creaturely nature and bears our sin, discloses the radical form of true humanity and how reconciliation leads to wholeness and holiness alike. (18-19)