The Lord of Space and Time

This post from Torrance scholar Robert T. Walker concludes a series exploring Thomas F. Torrance's book "Space, Time and Resurrection." Bob wrote this summary of chapter 8 of STR for a meeting of the Torrance Reading Group. For other posts in the series, click a number: 1, 2, 3, 4, 5, 6, 7. 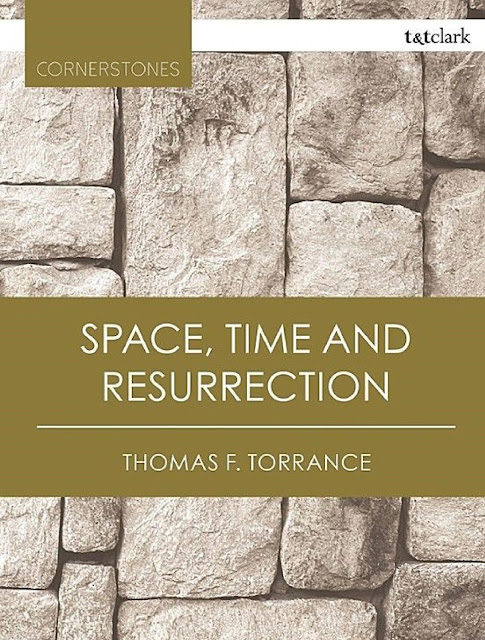 Chapter 8 of  Space, Time and Resurrection is a wonderful climax to a tremendous book. The opening theological sections are extremely moving and deserve to be read again and again, as does the whole book. The final much more epistemological-theological-scientific section is extremely demanding and certainly needs to be read many times, allowing more of its content to sink in each time. Here are some general recommendations for understanding Thomas F Torrance:

1. Key to reading Torrance is to read him quickly and as a whole, especially whenever it becomes too difficult and time-consuming to understand him bit by bit. Very often that can’t be done, because following him means having some understanding of the whole he has in mind to see where his thought is going. Speed reading gives us a sense (even if vague) of the whole and this then gives us vital clues for our rereading of the material.

As someone has put it memorably, “if I struggle with TF I just read him and let it wash over me”. Doing so, gives one some kind of “feel” for the whole, even if it can’t be put into words and this guides us in our next reading. Some of the words, if unknown, may require dictionary access but some may to some extent be intuited by the context. The key is to not worry if we don’t understand, but to listen and be content for understanding to come.

2. On the resurrection, I have often thought that the whole method of approaching it by trying to look first at the historical evidence and whether it is valid is misguided as it means not looking at the resurrection as it actually is. It is much better to begin with the incredible significance and vastness of its meaning, for the death of Jesus on the cross and his bodily resurrection means nothing less than the death in Jesus of the whole cosmos and its resurrection in him (not yet outside him) of us and the whole world. It is only when the vast significance of the resurrection begins to sink in that we can begin to  understand it as something infinitely more than the resurrection of a corpse, however miraculous.1

3. The extreme importance of Polanyi and Einstein for Torrance:

(a) Polanyi – the nature of knowledge and of how we learn things: “the tacit dimension”. When we learn a new complex skill, driving a car, riding a bicycle, playing the violin, we focus on, and start by practicing the basic different components of it again and again until we can do them. In the nature of the case, however, it is logically impossible to remember them all at once and make ourselves do them. This is because for them to become a natural inbuilt skill we have to rise to a new level in which we find ourselves doing them naturally without focusing on the individual elements. It is at this point that the new skill becomes “tacit” (not “focal”) – “the tacit dimension” as Polanyi calls it and he points out that a vast amount of our knowledge in all subjects, not least science, depends on such knowledge and on the fact that we always know much more than we can tell, and are in fact guided by such tacit awareness. Once we have risen to this new level, we can focus on refining our skill and beginning to focus on and learn the next higher level, until it too becomes “tacit. There is a never-ending learning of higher and yet more complex skills.

Polanyi also argues that the nature of the universe itself, and all knowledge of it, is stratified, consisting of new levels, in which each new level both depends on the levels below it and adds new features to their complexity and meaning. In the nature of the case, each level must be open to yet another above it. Hence, science itself must be logically open to the concept of God. Theologically, the highest level is of course Christ in the Trinity.

(b) Einstein – Torrance finds in Einstein’s epistemological thought a similar awareness of the logical gap between the highest levels of empirical-theoretical concepts and the even higher level beyond them which can only be accessed intuitively in a gifted leap of understanding (such as in relativity theory).

Even more important, it seems to me, is TF’s awareness of the significance of Einstein’s concept of space-time which means that God is not in space (for space and time only come into being as features of creation) but is immediately present to everything in space-time. There is no time to go into the difference here between Newton’s ‘container’ view of space and time and Einstein’s ‘relational’ view but it will be possible in our discussion.

4. I cannot recommend strongly enough the need to read, reread and soak up the Epilogue to Torrance’s Atonement, the 10 page article which is quintessential to Torrance, the rationale and whole nature of his theology. Here he insists on the need for us all to allow (through disciplined biblical study, worship and prayer) the development in us by grace of a theological instinct of truth which must be continually deepened and which we then find guiding us in all our thinking. Faith’s seeking of such understanding is necessarily life-long.

1 See the introduction to Atonement, the Person and Work of Christ, pp. xvliii – lv, for a summary overview of the doctrine of resurrection and the importance of the modern much more open concept of scientific law in the citation from Richard Feynman (p. li).

Welcome to The Surprising God where Grace Communion Seminary (GCS) on behalf of Grace Communion International (GCI) explores the content and application of Incarnational Trinitarian Theology. Except as noted, posts are from GCS faculty member Ted Johnston. Though GCS and GCI embrace what is expounded here, blog posts are not official doctrinal statements. To comment on what is posted here, go to GCS's two Facebook groups (Trinitarian Theology Forum and Trinitarian Ministry and Worship) where many of the posts here are re-posted.