Showing posts from January, 2009
Show all

Jesus, the revelation of God

- January 28, 2009
I was reading in the newspaper of a clergyman working in retirement as a fire department chaplain. As I read the article, I found myself admiring his wonderful ministry of love to fire department personnel and fire victims. However, I was saddened by his statement that... If Jesus is the only way to salvation and you believe that, you follow that for you...I just have trouble with people saying 'I know my way is the right way.' If God is real - and I believe that's true - God is truth with a capital 'T.' You can't talk about an infinite being using finite language. Everybody's belief is, in reality, an assumption.  While I sympathize with part of his statement, I beg to differ with his assertion that "you can't talk about an infinite being [i.e. God] using finite language."  In essence, he is claiming that God is inaccessible in any full sense to human understanding.   But the stunning truth about God given to us in Holy Scripture, i
Read more

What About Being Born Again?

- January 16, 2009
Does belief that all humanity is included in Jesus, conflict with the idea of a personal new birth (regeneration)?  Let me answer by first quoting N.T. Wright's book, "Surprised by Hope." He speaks on pp. 270-272 of regeneration and the related topic of baptism: One of the most striking mentions of the new birth is found in the great opening of 1Peter [v. 3]. God in his great mercy has given us a new birth to a living hope by the resurrection of Jesus Christ from the dead. Jesus's resurrection is directly instrumental in bringing about this new birth and its consequences. It is all because of what happened at Easter: a new reality has opened up in the world, a new kind of life both inward and, importantly outward in holiness and in the hope of our own resurrection... Baptism too... is closely allied with the resurrection of Jesus...best understood within the theology of creation and new creation, and of the overlapping of heaven and earth...The resurrection o
Read more

The primary task of ministry 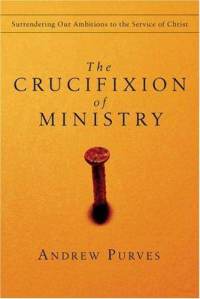 In "The Crucifixion of Ministry" Andrew Purves tells us that Christian ministry is our participation in what Jesus is doing. Thus the primary task of our ministry is to bear witness to Jesus. In that regard, Purves references the Isenheim altarpiece painting by Matthias Grunewald (shown at left). Note the hands in the painting. Our ministry is typified by the hands of John the Baptist (at right) who directs our gaze away from himself to Jesus. At John's right hand are the words (in Latin) of John 3:30: "He must increase, but I must decrease."   Purves comments further on the painting: We should note the other hands in the painting. The primary direction is to look to the crucified Jesus. His enlarged hands show the agony of his atoning death for us. Then there are the enlarged praying hands of Mary Magdalene and the enlarged comforting hands of the apostle John. The other hand of the Baptist holds the open Bible. Even the Lamb at the foot of the cross
Read more

- January 03, 2009
In anticipation of Epiphany, I'm struck by the words of T.F. Torrance in "Incarnation, the Person and Life of Christ," p. 316: The New Testament constantly thinks of the parousia  in terms of epiphany, for the relation between the today and the eschaton  is much more a tension between the hidden and the manifest, the veiled and the unveiled, than between dates in calendar time. What is still in the future is the full unveiling of a reality, but the reality itself is fully present here and now. Epiphany reminds us that with the birth of Jesus, God became God with us (Immanuel). With this advent, the Kingdom is now present to us in the person of its King - unveiled (revealed) to us personally, as we await, in hope, the full unveiling (revealing) yet to come when Jesus returns bodily in the fulness of his glory, ushering in the fullness of his Kingdom in a new heaven and new earth. In Epiphany we may think of Jesus' unveiling as a revealing that occured in the
Read more
More posts
Welcome to The Surprising God where Grace Communion Seminary (GCS) on behalf of Grace Communion International (GCI) explores the content and application of Incarnational Trinitarian Theology. Except as noted, posts are from GCS faculty member Ted Johnston. Though GCS and GCI embrace the theology expounded here, posts are not official statements of doctrine. You may comment on posts where they are reposted on GCS's two Facebook groups: Trinitarian Theology Forum and Trinitarian Ministry and Worship.