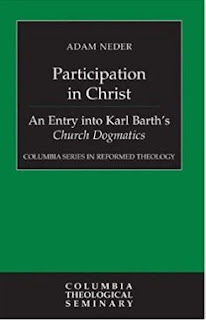 Perhaps you've read parts of Barth's Dogmatics and found it rather difficult and daunting (6 million words in 13 volumes!). I'm thankful to Dr. Neder for writing this accessible book, which shows how participation in Christ is a key concept in Barth's theology. Neder comments:


According to Barth, revelation, election, creation, reconciliation and redemption all take place "in Christ," and their meaning and content may only be rightly comprehended in him. In fact, the very being of all humanity itself is objectively included in the being of Jesus Christ, and is likewise subjectively (i.e., by individual people) realized in him. In these acts of inclusion and realization, the creature is incorporated into a depth of fellowship that is nothing less than participation in the being of God. Statements such as these are at the heart of Barth's theology. Yet they cry out for explanation (p.xi, emphasis added).

Cry out, indeed! And so we have wrestled with such statements on this blog - ones that surface in the writings of theologians both ancient and contemporary who, like Barth, advance a theology that is incarnational and Trinitarian.

Neder observes that at the heart of Barth's thought is the stunning reality of the union between God and humanity that has been forged in the person of Jesus Christ. According to Barth, this divine-human union is one of "active distinctions, which occurs in the communion of free divine lordship and correspondingly free human obedience" (p.xiv).

Because it involves God (in his divine freedom) acting to grant freedom to humanity, this divine-human union has both objective and subjective aspects:

According to Barth, this covenantal grace of God to us in Christ has three aspects, namely...


...justification, sanctification and calling, which together constitute the objective being of humanity and call forth the corresponding threefold response (faith, love, and hope) in which this being is subjectively [personally] realized (p.xv).

How does Barth arrive at these conclusions? The answer involves, in part, his understanding of the nature of divine revelation. We'll examine that important topic in part 2 of this series.
Welcome to The Surprising God where Grace Communion Seminary (GCS) on behalf of Grace Communion International (GCI) explores the content and application of Incarnational Trinitarian Theology. Except as noted, posts are from GCS faculty member Ted Johnston. Though GCS and GCI embrace what is expounded here, blog posts are not official doctrinal statements. To comment on what is posted here, go to GCS's two Facebook groups (Trinitarian Theology Forum and Trinitarian Ministry and Worship) where posts from here are often re-posted.