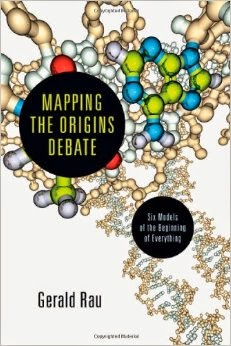 What does this topic have to do with incarnational, Trinitarian theology? Principally this: the Triune God, who created the cosmos, now sustains it moment by moment. As noted in Scripture, "In him [God], we live and move and have our being" (Acts 17:28). There is no distant, uninvolved, deistic God here.

The Triune God revealed to us in the person and work of Jesus Christ is one who has been and continues to be involved with his creation in the most intimate, personal way. However, in his grace, God does not, through his involvement, dictate all that happens to his creation as though he was a puppeteer manipulating his marionette. Rather, in love and for love (real relationship), God grants his creation (humankind included) freedom to develop--or in the words of science (which need unpacking), freedom to evolve. This freedom to be and to become does not exist apart from God, and thus is said by theologians to be "contingent freedom" (more about that in later posts as this series unfolds).

Unfortunately, the origins debate (often more a war than a respectful debate), tends unhelpfully and unnecessarily to pit science against religion (or perhaps better said, naturalism against theism [1]). At times, it also pits one group of Christians against another. Sorting through the issues in the debate is a huge undertaking--too big for a blog like this. Nevertheless, I will endeavor to sort through the primary issues in a series that will draw from Gerald Rau's helpful book, Mapping the Origins Debate, Six Models of the Beginning of Everything (InterVarsity, 2012). I particularly appreciate Rau's humility and, to the extent possible, his objectivity. Note how Rau concludes the book:


Wars are costly and take resources away from other things [that] time and money and lives could be better spent on... Unfortunately, they seem to be inevitable, a result of our sinful hubris that leads us to believe that we are right and others are wrong, rather than admitting that the truth is beyond our ability to grasp. Doubtless in the end the whole truth will prove far more complex than we can conceive at the moment... [Therefore], let us strive for humility and charity in our dealings with our brothers and sisters (and even those we do not consider family) who hold a different understanding of the issue than we do, realizing that we all see as "through a glass, darkly" (1 Cor. 13:12 KJV) until we see face to face (p190).

I hope that this post, and ones that follow on this topic, will reflect the same reserve and humility. There was a time when I felt quite confident that I had the whole origins thing buttoned down. But the more I learned from Scripture and from science, the more I came to realize that the issue is complex and I know far less about both topics than I had assumed. Rau does us all a favor by mapping out six basic positions (he calls them "models") in the ongoing origins debate. With an admirable even-handedness, he compares and contrasts the six models, pointing out the strengths and weaknesses of each, all the while looking for common ground.

A key concept in Rau's book is to recognize that each model is framed/influenced by a particular worldview (philosophy/perspective) leading to and grounded in certain presuppositions that influence how people view/interpret the relevant data (be it data in Scripture or from the natural world via science). Rau explains it this way:


The fundamental thesis of this book is that although everyone has access to the same evidence, the presuppositions implicit in a person' philosophy determine the perspective from which he or she views the data, leading to different logical conclusions about which explanation [of the data] best fits the evidence (p20).

This concept comes to the fore most significantly when facing the reality that the universe exists, thus raising this fundamental question: Is the universe eternal (i.e. has it always existed) or did it at some point in time come into existence? Rau frames the question this way:


Something external to the universe must have been present--either another source of the matter and energy it comprises or something with the ability to create matter and energy. Put more simply, there are only two logical choices for what is eternal--natural or supernatural (p20).

Related to these two positions are various worldviews with certain deeply held presuppositions. No one in this debate is exempt from this dynamic. Those who hold a naturalistic worldview, "must of necessity postulate a way for matter and energy to be eternally self-existent" (p22). Those who hold a theistic worldview, may have various views of science, depending on how they believe God interacts with the world, and thus the origins debate often pits one Christian group against another, particularly when it comes to interpreting the early chapters of the book of Genesis.

Unfortunately, the origins debate often is framed as science vs. religion, or evolution vs. creation (as though these concepts are hopelessly at odds). But the debate is far more complex than that and there are certainly more than the two positions that fall at the polar extremes of the debate (the ones that often get the most press!).

To some extent, the polarization we see in the debate arises because "science" is a particularly difficult word/concept to define. "There are many types of science, each with its own methods and techniques... [as a result] it is hard to delineate where science ends and some other way of knowing begins" (p23). Moreover, it often is not fully appreciated that the scientific method, by its very nature, necessarily involves three components: presupposition, evidence and logic. Different fields of science utilize different types of evidence with a logic that is specific to that type. For example, historical science studies non-repeatable physical events (including origins). This field is quite different from fields of science that study ongoing events. But in all fields of science, inferences must be made in order to interpret the evidence deemed relevant. These inferences necessarily rely on either deductive or inductive logic.


Inferences arising from deductive logic are either valid or invalid, while those arising from inductive logic are either strong or weak (see the decision tree above). Inferences related to origins, necessarily are inductive, and thus cannot be absolute--that is, they cannot be shown to be true or false (in an absolute sense). No one was present at creation (using a biblical term) or at the big bang (using a scientific term). Looking at the evidence for this non-repeatable event, we use inductive reasoning to infer what occurred. Those inferences are, necessarily, shaped by our presuppositions--this is true for scientists and for theologians.

Contrary to what I just said, there was a time when it was claimed that science uses only evidence and logic in its work and was thus free from any presuppositions. That claim now is understood by most to be false. "Science cannot be done without some philosophical assumptions or presuppositions" (p26). But lest we religious types get all smug about this, we must admit that we too bring to the debate our own set of presuppositions. The point is that when it comes to the topic of origins, pure objectivity (reasoning apart from any presuppositions) is simply not possible for naturalists or for theists. We all approach the topic with the perspective of a particular theory, and doing so affects both our data collection and our interpretation of the data.

Rau admits that one of the presuppositions of his book (a presupposition that I happen to share with him, holding as I do degrees in Christian Studies, Environmental Science and Psychology), is that "ultimately there is a unity of knowledge--a reality that can be known--but we [must] use multiple approaches to seek that knowledge" (p27, italics added). I would add that I find Rau's perspective in line with an incarnational, Trinitarian theological viewpoint, for it speaks to the real and dynamic relationship, one grounded in freedom, which God has with his creation. However, I acknowledge that this position, itself, cannot be "proven" in a direct way. Rather it is inferred from available evidence, and for me, that evidence comes both from the book of revealed knowledge (Holy Scripture) and the book of nature (science)--both which tell us important things about the ground of all reality, which is the Triune God himself--Father, Son and Spirit.

As we proceed in this series on the origins debate, we'll see that Rau maps out and carefully examines six explanatory origins models: 1) naturalistic evolution 2) non-teleologial evolution 3) planned evolution 4) directed evolution 5) old-earth creation, and 6) young-earth creation. Next time we'll begin to define and explore each one. I hope you'll find this series illuminating, and that you'll come to more fully appreciate the issues involved, no matter which model you personally embrace.
________________________
[1] Concerning the conflict between naturalism and theism, I highly recommend Alvin Plantiga's book Where the Conflict Really Lies: Science, Religion, and Naturalism.
Welcome to The Surprising God where Grace Communion Seminary (GCS) on behalf of Grace Communion International (GCI) explores incarnational Trinitarian theology. Except as otherwise noted, posts here are from GCS faculty member Ted Johnston. Though GCS and GCI embrace the theology addressed here, blog posts are not official doctrinal statements. Comments on blog posts may be posted on either of GCS's Facebook groups: Trinitarian Theology Forum and Trinitarian Ministry and Worship.