The love of the Father

- 2/05/2015
This post continues our look at the book Communion with the Triune God in which Dick Eugenio examines Thomas F (TF) Torrance's trinitarian understanding of soteriology. In previous posts we looked at TF's understanding of Jesus' role in our salvation. Now we'll look at the Father's role. For the other posts in this series, click on a number: 1, 2, 3, 4, 5, 6, 7, 9, 10, 11. 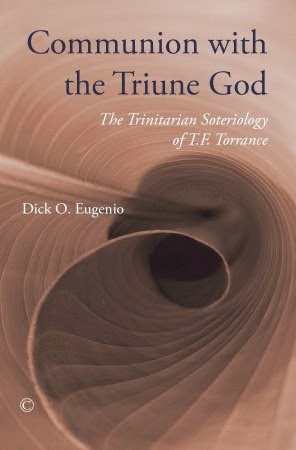 It's sad, but true: God the Father often is viewed as an angry judge whose principal concern is legal justice. From that perspective, salvation is about being rescued from the Father's "just wrath" against sinners. This idea, or something akin to it, underlies many forms of the Christian doctrine of salvation (soteriology), particularly ones grounded in what is referred to as the penal-substutionary theory of the Atonement (see, for example, the cartoon on the Patheos blog).

This perspective on salvation "paints" on the face of God the Father an angry image which TF vehemently rejects. His view of the Father is grounded in what Jesus has revealed. That revelation was recorded in Holy Scripture and codified in the orthodox doctrine of the Trinity which declares that the Father, Son and Spirit, though three in Person, are one in being. this means that the Father, Son and Spirit are of the same heart, sharing the same values and perspectives concerning all matters, including sin and sinners. There is not an angry Father who is quite different than his loving Son.

For Torrance, this insight is a powerful, life-transforming reality, which he personally encountered in the midst of human suffering. Note this quote from First Things:


Torrance’s sense of mission, formed by his experience as the child of a missionary family in China, guided him throughout his career. As a chaplain during World War II, he came across a young soldier, scarcely twenty years old, who was mortally wounded. “Padre,” he asked Torrance, “Is God really like Jesus?” Torrance assured him, “He is the only God that there is, the God who has come to us in Jesus, shown his face to us, and poured out his love to us as our Savior.” As he prayed and commended him to the Lord, the young man passed away.

A few years later, one of his parishioners in Aberdeen [Scotland], a dying, elderly lady asked him the same question: “Dr. Torrance, is God really like Jesus?” That this doubt arose from among believers within the Church itself troubled Torrance deeply. He wondered how the Church distorted its message and created obstacles for its members that kept them from joyous participation in communion with the living God that was theirs in Christ by the Spirit.

The question of the dying soldier and woman suggested to Torrance that people believed there was a God “behind the back” of Jesus. But for Torrance, God has already established communion with men in Christ, and the Church is the community of witness to God’s reconciling activity in this creaturely world of space and time. The Church proclaims that through Jesus Christ and the Holy Spirit we have access to God the Father. This message, for Torrance, is the heart of the Gospel, the essence of the Church, and the sole foundation for all theological activity.

As TF was fond of saying, "There is no God behind the back of Jesus,"--no dark, angry, justice-obsessed Father lurking in the shadows, who, in wrath, would pounce upon sinners were not the loving Jesus holding him back. No, the Father is just like Jesus--the friend of sinners no matter what their state. Jesus put it this way: "Anyone who has seen me has seen the Father."

Jesus and the Father (with the Spirit) are of one being. Therefore, when you encounter Jesus, (and experience his unconditional love for sinners) you can be sure that you have experienced the being/heart of the Father as well. Indeed, "God [the Father] so loved the world that he gave his one and only Son, that whoever believes in him shall not perish but have eternal life" (John 3:16). That is gospel truth you can rely upon and rest in.

Dick Eugenio devotes a significant portion of his book to explaining Torrance's trinitarian perspective on the Father as one in being with his Son and Spirit in all matters pertaining to our salvation. Here are representative quotes:


Outside of Christ, or "behind the back of Christ," [quoting Torrance] there is no genuine knowledge of God. The incarnation of the Word in space and time, as God's final and decisive self-communication, not only sets aside all other ways of knowing him, but also creates the parameters within which such self-communication is to be understood, appropriated and interpreted (Communion with the Triune God, Kindle ed, loc 2765).

Christ's twofold movement of atoning propitiation in the incarnation and atonement is the Father's appointed way of drawing himself near to us and us near to him (loc 2829).

First [we know that], the Father is love because the being of the Triune God is a communion of love. Secondly, that the Father is love is portrayed in his eternal relation to the Son "the Father/Son, Son/Father relation belongs to the innermost being of God as God--in fact the flow of love from the Father to the Son and from the Son to the Father reveals that God is the ever-living and ever-loving God precisely as this dynamic communion of loving and being loved within himself" [quoting Torrance]. Finally, the Father as love is manifested in his creative and sustaining act and redemptive purposes. "By revealing himself in the Lord Jesus Christ as his dear Son," Torrance writes, "God reveals that Fatherhood belongs to his eternal Being, and in giving his Son to be the Savior of the world, he reveals that he loves us to the uttermost with an eternal fatherly Love" (loc 2880).

It is through the cross that we learn "the innermost nature of God the Father as holy compassionate love," which the resurrection also confirms (loc 2946).

Eastern theologian Emilianos Timiadis writes: "God has love for us because he is love himself. We witness a trinitarian relationship based on the mutual love of each Person, where the difference is only apparent, necessary to communion. Each time we speak of the Trinity, we must think of nothing else but Love.... God is Love." This is important to Torrance, because of his insistence that human salvation is ontologically grounded in God's being.... [which is] essentially personal, dynamic, and relational (loc 2973).

The whole raison d'être of the universe lies in the fact that God does not will to exist alone, that he will not be without us, but has freely and purposely created the universe and bound it to himself as the sphere where he may ungrudgingly pour out his love, and where we may enjoy communion with him (loc 3001).

PS: For a related Jesus Creed blog post offering insights on this topic from NT Wright, click here.
Welcome to The Surprising God where Grace Communion Seminary (GCS) on behalf of Grace Communion International (GCI) explores incarnational Trinitarian theology. Except as otherwise noted, posts here are from GCS faculty member Ted Johnston. Though GCS and GCI embrace the theology addressed here, blog posts are not official doctrinal statements. Comments on blog posts may be posted on either of GCS's Facebook groups: Trinitarian Theology Forum and Trinitarian Ministry and Worship.