Communion with the Triune God: Conclusion 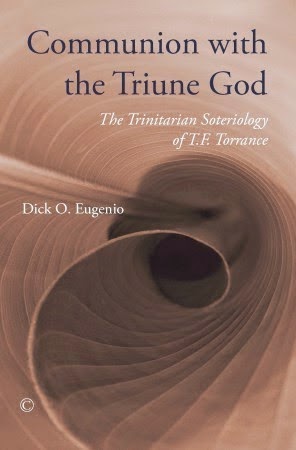 TF was careful to approach the doctrine of salvation in accordance with the incarnational, Trinitarian understanding of the Christian faith set out in the ancient Christian creeds. As Eugenio notes, rather then seeing salvation as transactional (in accord with the reductionist formula of "accepting Jesus Christ as Lord and Savior,"), TF viewed it as "union with Christ and being adopted as sons and daughters of the Father in the incorporating communion of the Holy Spirit," by which humanity is enabled to "share in the inner relations of God's own life and love" (Kindle ed, loc 4925). God, in Christ, by the Spirit, makes this union and communion subjectively (personally) possible because it is an objective reality in the enduring union of God with all humanity in the person of the incarnate Son of God, Jesus Christ.

For salvation to be understood in this incarnational, Trinitarian way, it's essential that we see God for who he is: a triune communion of love; and that we see salvation for what it truly is: our sharing in that triune life and love. Thus for TF, salvation is far more than a mere transaction--it's an enduring relationship that is mediated by Jesus Christ himself (1Tim. 2:5). Of course, to see God and salvation in this way, God must reveal himself to us for who he truly is. And this he has done in the Person and work of his incarnate Son, Jesus Christ. It is Jesus who is the full and final revelation of God. It is Jesus who shows us the Father and the Spirit, and thus the truth of God's tri-unity. Moreover, Jesus, in his enduring humanity, shows us our true humanity, in intimate relationship with God.

For TF, this knowledge of God and humanity is far more than mere facts with which we agree--it's knowledge that transforms; what TF referred to as "evangelical knowledge." Why? Because this truth is "revealed to us through the incarnate or human economy which Christ undertook toward us, in the midst of us, and for our sakes" (loc 4949). Thus TF was fond of writing about the evangelical Trinity, noting that there is no other God than the redeeming God who, in his Son and by the Spirit, has united himself with all humanity in a redeeming way (loc 4962).

Whereas some theologians view the Trinity in a static, Aristotelian way, TF sees a "relational God, a person-in-relation" (loc 5052). For God, "to be" and "to-be-in-relation" are the same. TF writes about this using some of his favorite patristic terms:


It was in connection with this refined concept of perichoresis in its employment to speak of the intra-trinitarian relations in God, that Christian theology developed what I have called the onto-relational concept of the divine Persons, or an understanding of the three divine Person in the One God in which the ontic relations between them belong to what they essentially are in themselves in their distinctive hypostases. Along with this there developed out of the doctrine of the Trinity the new concept of person, unknown in human thought until then, according to which the relations between person belong to what persons are (loc 5092).

One of the important implications of TF's understanding of God as relational being is "the realization that communion is what makes being 'be'" (loc 5121). Said another way, there is no separation between God's being (who he is) and God's act (what he does). God does what God is. He is being-in-communion. "In contrast to Aristotle's God as the 'Unmoved Mover,' the biblical God is a dynamic active being. Life, movement, and activity are intrinsic to the very being of God" (loc 5188).

Salvation, then, is dynamic and relational--our sharing in the love and life (communion) of the triune God as God's adopted children. In communion with God, in Christ, by the Spirit, we are saved in the full, relational sense: delivered, held safe, healed, and lifted up to participate in the very light, life and love of the Holy Trinity (loc 6460).

According to Eugenio, "Torrance is an outspoken critic of the fascination of federal Calvinists with the benefits of the death of Jesus Christ, understood in a mechanistic-logical manner" which leads, inevitably to the idea of limited atonement:


At the root of this view, according to Torrance, is a logical one-to-one mechanistic view of the relationship between what Jesus Christ accomplished and what humanity receives (i.e., because not everyone is saved, Jesus Christ died only for the elect) without consideration of the dynamic nature of the triune salvific economy (i.e. Jesus Christ is elected by the Father in the Holy Spirit for the world). Thus one effect of an explicit trinitarian view of atonement is that the dynamic nature of redemption is highlighted. Instead of perceiving atonement primarily in terms of a transaction, it is perceived as a dynamic movement that "begins with the Father, extends through the Son and reaches its fulfillment in the Holy Spirit," so that humanity through the incarnate Son in the Holy Spirit may become sons and daughters of the Father" (loc 5227).

TF is fond of depicting at-one-ment with God using relational terms like "sharing," "joining," and "participation" in the inner life and love of the Triune God (loc 5252). Perhaps referring to TF's soteriology as "participation soteriology" would capture its essence well, and perhaps "perichoretic participation" would be even more precise.

By the way, this view of salvation as participation in the triune life and love of God, in Christ (the Mediator), by the Spirit, is not a modern theological innovation--it's the historic, orthodox theology taught by the early church fathers and the theology that under-girds the Nicene Creed. This ancient view is the gospel taught by Christ's apostles. It is, indeed, very good news! And with that declaration, we close this series with a hearty, Amen!

PS: If you have benefited from this series of posts, I urge you to purchase a copy of Eugenio's book. Click here to find it on Amazon.com (print and Kindle versions available).
Welcome to The Surprising God where Grace Communion Seminary (GCS) on behalf of Grace Communion International (GCI) explores incarnational Trinitarian theology. Except as otherwise noted, posts here are from GCS faculty member Ted Johnston. Though GCS and GCI embrace the theology addressed here, blog posts are not official doctrinal statements. Comments on blog posts may be posted on either of GCS's Facebook groups: Trinitarian Theology Forum and Trinitarian Ministry and Worship.