Our identity: God- or me-centered?

By Ted Johnston - December 27, 2015
This is the first post in a series exploring God, Freedom & Human Dignity: Embracing a God-Centered Identity in a Me-Centered Culture by Ron Highfield, professor of religion at Pepperdine University. My thanks to Dr. Gary Deddo for recommending this book. I'll be summarizing its key points. I solicit your comments as we proceed. To read other posts in this series, click on a number: 2, 3, 4, 5, 6, 7, 8, 9, 10, 11, 12, 13. 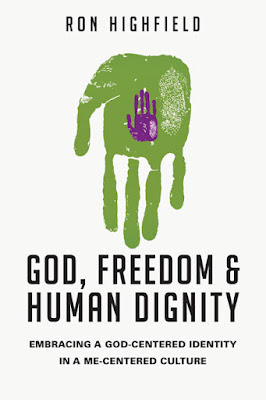 Within Christianity and without, debates rage over questions related to ethics: How should we live/behave? On what do we base our answers? Incarnational Trinitarian theology, following the Christo-logic of the biblical gospel, answers these questions by pointing to the related topic of identity. Why identity? Because that is where Scripture takes us, in line with the truth that we humans tend to live (behave) in accord with our sense of personal identity.

With respect to identity, the gospel declares that our true, God-given personal identity is found not within ourselves, but in Jesus, in whom divinity and humanity are permanently united in one person. As we embrace our God-centered identity found in Jesus, we are set free from the bondage created by embracing a me-centered identity.

Though counter-intuitive to many people, and certainly counter-cultural in our me-centered world, a God-centered identity is the only secure basis for the personal freedom and dignity that all people deeply desire. However, many people (including, sadly, some Christians), bristle at the idea that their true identity is to be found outside of themselves---especially when you tell them its location is in the humanity of Christ. Why? Because most people think God has an agenda to deny them freedom and thus personal dignity. They see God as a rigid, perhaps grumpy parent who wants his children under strict control. But that is not the nature of the God revealed to us in the person of Jesus Christ, who said that if we have seen him, we have seen the Father (John 14:9, with "see" meaning "know"). And Jesus says that to know him (and thus the Father) is not to lose our true freedom but to gain it (John 8:36). Jesus, who is fully human (as well as fully divine) shares with us his true humanity, and that brings us true freedom. Highfield puts it this way in his preface:


Christ pioneered the way to truly human life in which human beings achieve their deepest potential for freedom..... In Christ we find an identity rooted not in others' changing thoughts about us but in God's eternal knowledge of us. Through the Spirit, God enables us to achieve the perfect freedom of life in harmony with our truest identity. (pp 13, 14)

God leads us to seek and embrace this true identity---who we truly are in union with Jesus Christ by the Spirit. But to do so will inevitably bring us up against the spirit of our me-centered age. Highfield comments:


Modern culture denies that one can become an authentic person or experience fulfillment in life by conforming to natural or socially given relationships and roles. Instead we are taught that our self-worth and happiness depend on reconstructing ourselves according to our desires. (p 17)

In a helpful section in chapter one, Highfield sketches out the historical journey through which a me-centered conception of personal identify arose and became dominant within Western culture. He examines the thoughts of Plato, Aristotle, Augustine, Descartes, Locke, Rousseau and others---ideas and ideals that have profoundly shaped our modern, me-centered worldview. A key element in that worldview is the issue of freewill (or, more properly, self-determinism). As Descartes wrote, "Nothing but freewill can produce our greatest contentment" (p 21). In step with this worldview, we moderns want to be able to remake ourselves in any way we choose. The net effect is that within Western culture, "the modern self sits sovereign above the world." (p 22)

With this ideology fully in place via the Enlightenment, "the stage was set for declaring God completely unnecessary for living a flourishing human life" (p 28). Interestingly, Rousseau, who had been an advocate of this thinking became a critic, noting that the Enlightenment project "was too optimistic about the innocence of human nature" (p 29). Nevertheless Enlightenment thinking largely prevailed and individualism and self-determinism won the day. Highfield summarizes:


The modern self is me-centered. Most people are not self-centered in the crass sense of being selfish or narcissistic; nevertheless they locate all values and sources of fulfillment within the self, in its feelings, preferences, thoughts, opinions and wishes. Even when they cannot articulate it this way, they ground the respect they feel for others in such inward qualities as autonomy, inner desires and unique inner depth that requires expression. It would seem [to them] odd to ground respect for others in something extrinsic, such as divine creation or divine love or a divine command. Withholding respect from others because of their choices or desires or ways of self-expression strikes our contemporaries as irrational and hateful. (p 31)

This being the case, "contemporary society has lost its ability to carry on rational discussion of moral issues" (p 32)---one thinks here of the ongoing debates on such ethical matters as human sexuality, same-sex marriage, and the like. What passes for rational debate often is nothing more than assertion of personal preferences with no grounding in a realization of the essential elements of human nature and its ultimate end (goal/telos). Those who seek to ground such discussions in a Christian anthropology definitely are "swimming upstream" against the current of a modern, me-centered view of human identity. Highfield comments:


The current moral culture was founded on rejection of the traditional claim that human beings are given their essence and end [goal/telos] by God... Many of our contemporaries exhibit a viscerally negative reaction to assertions of authority, pretense of objectivity or arguments to truth in the moral sphere. They instinctively suspect all such claims as masking desire for power, and making those claims sets in motion the process of unmasking. To many people, Christian calls for obedience to the divine law, for repentance and moral transformation sound like recipes for oppression. (p 38)

Given this situation, how are we as Christians to proceed? The answer, of course, is that we begin by finding our own identity in Jesus Christ (and nowhere else). Then we let this Christ-centered, gospel-shaped identity determine the shape of our personal ethics. Then, perhaps, we can share with others what we have learned (we call this evangelism). Stay tuned and we'll learn more from Highfield about all of this. You may not agree with all he says, but I think you'll find it enlightening.
Welcome to The Surprising God where Grace Communion Seminary explores incarnational Trinitarian theology on behalf of Grace Communion International. Though both groups embrace the Nicene faith addressed here, posts on this blog are not official doctrinal statements. Comments that promote respectful discussion are welcomed and may be posted on GCS's Facebook groups: Trinitarian Theology Forum and Trinitarian Worship and Ministry.