Freedom and our true self

Last time we saw how, in Christ, we have been made God's dearly beloved children by the grace of adoption. Our identity and thus our true freedom come from our sharing, by the Spirit, in Jesus' own relationship with the Father. In this post we'll look at what Highfield says about how this perspective defines true human freedom.

Freedom and the self

As Highfield notes, "Every theory of freedom includes an understanding of self" (p. 171) and that understanding then shapes one's behavior. As we have seen in this series, the modern sense of self is fundamentally "me-centered"---self-sufficient, self-defining; relating to things outside the self only as they are seen as benefiting the self. In contrast, Christianity defines a "God-centered" self---the self defined in a relationship of love with God and others. Highfield comments:

Our origin lies hidden in the love of God who gives us life continually because God wants us to know love and love in return. Living in awareness of [this] truth requires us to acknowledge that we owe our being, with all its powers and possibilities, to God. The self that knows itself truly, lives in joy and gratitude, for joy is the natural response to good, and gratitude is the fitting response to the giver of the good....

Whereas the modern [me-centered] view considers the self pure will without natural direction nor ends, Christianity sees the self as having a nature and an end. We were created by God to enjoy certain goods, to pursue certain activities, to love certain things and become something in particular. Some activities and ends work against our nature and cause self-alienation and suffering. We were not created to love only ourselves, we were created to know and love God. We were created in the image of God, and our nature can be fulfilled only by becoming like God as his dear children....

If we consider the self the mysterious self-creative will at the core of our being, freedom will be understood as the natural power of self-determination. But if we think of the self as the created image of God revealed in Jesus Christ, we will think of freedom quite differently. In every view of freedom the self acts freely when it puts itself into action. In Christianity, the self is defined as a certain kind of relation to God, as God's image. This image is not an accidental relation that the self may or may not possess; it is its essence. And our lack of awareness of our true identity does not change the fact. But to experience true freedom the self must transform this objective God relation into it own subjective act.... We can enact ourselves freely only by willing God's will for ourselves and in this way imaging God's character. Refusal of this act is the self's refusal to be itself, that is, its refusal to be free." (pp. 172-3)

True vs false self

True human freedom and dignity are thus found in the truth (reality) of who we actually are in Christ---God's beloved children. But what keeps us from knowing that truth and living in ways that correlate with it? Scripture shows that the answer is found in the contrast between who we are in Adam (our old/fallen, false self) and who we are in Christ (our new, true self). As the apostle Paul tells us, the old self was crucified with Christ (Romans 6:6-7) and by the power of the Spirit we are to put off the old way of thinking and behaving that go with the old self (Ephesians 4:22-23). Indeed, we are to "take off" the false self and "put on" the true self that is found in Christ (Colossians 3:9-10).

The false self was buried in the waters of baptism with Christ (thus dying in Christ). But as some have noted, the false self is a good swimmer! As Paul makes clear, though the old self was put to death, it is not yet fully dead. Highfield addresses this paradox this way:


[We live in the] transition from the old age of Adam to the new age of Christ in which we now live by faith. The power of the new age works effectively to re-create and reorient the lives of believers... One [age] is past though still able to trouble the present, the other is future, though powerfully active in the present. The believer feels the "eschatological tension" between the two.... [Paul] underlines the fact that the transition from the old to the new self occurs decisively in the historical events of the death and resurrection of Jesus Christ... For Paul, the new self is not merely one of many possible selves as if new meant "currently fashionable." The new is also the true self that conforms to the "image if its Creator" (Colossians 3:10). Without the redemptive work of Christ and the renewing and empowering work of the Spirit, the human person cannot think, act or feel in conformity to the image of God, which is our created being. For Paul, the state of self-alienation is the old self, an identity that has been and should be left behind. The new self is the very same person who, because of the work of Jesus Christ and the Holy Spirit, now acts and feels and thinks consistently  with their true being. We can know our true selves only by looking at Jesus Christ. (pp. 174-5) 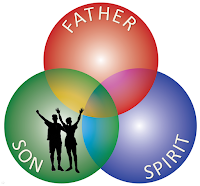 A key concept here is the reality of our union with Christ. We are God's children only because the Son of God, through the incarnation, has united our human nature to his divine nature and as one of us, putting the old self to death and giving humanity its new and true self found in his perfected (glorified) humanity---humanity that we now share with him by the grace of adoption. Thus "union with Christ" is not a mere metaphor---it is the reality of our true human being. Paul urges us to be who we truly are in union with Christ and thus to act out of our true identity as children of God (rather than acting out of the old identity that is now dead).

But how do we find the ability to both see and act out of that true identity? In Romans 7, Paul makes it clear that this ability does not come through our own efforts related to keeping the law. No matter how well disciplined we may be, we are utterly unable to find the truth, believe the truth and obey (live out of the reality of) the truth. In Romans 8, Paul shows that this enlightenment, this faith and this obedience are all gifts of God. It's the Spirit of God, through acts of grace, who "makes us children of God"---which is to say that he enables us to be who we truly are---children of God who, in freedom and for freedom, cry out "Abba Father" (Romans 8:14-15). Highfield comments:

And it is from this true, God-centered human identity (the reality of Jesus Christ), that comes our true human freedom.
Welcome to The Surprising God where Grace Communion Seminary (GCS) on behalf of Grace Communion International (GCI) explores the content and application of Incarnational Trinitarian Theology. Except as noted, posts are from GCS faculty member Ted Johnston. Though GCS and GCI embrace the theology expounded here, posts are not official statements of doctrine. You may comment on posts where they are reposted on GCS's two Facebook groups: Trinitarian Theology Forum and Trinitarian Ministry and Worship.