This blog frequently explores the writings of Trinitarian theologian Thomas F. (T.F.) Torrance. Some complain that T.F. is hard to understand and I felt that way when I started reading him about 12 years ago. No question, Torrance is challenging to read---particularly at first. There are a couple of reasons: First, in most of his books he writes as a theologian to other theologians using technical theological terms. Second, T.F. explains ideas and concepts that run against the grain of everyday experience, asking us to look at reality (God in particular) in new (even radically new) ways.

Over the years in this blog, I've tried to put T.F.'s teachings into common language. I've also recommended books by authors who have sought to do likewise. One I've often recommended is Elmer Colyer's How to Read T.F. Torrance: Understanding His Trinitarian and Scientific Theology. Though it's a great resource, it is a bit technical and detailed. I've often thought we need a book that gives a more concise, easy-to-read summary of T.F.'s main teachings. I'm happy to report that we now have that book: T.F. Torrance in Plain English by Stephen D. Morrison. Stephen does a great job capturing the essence of T.F.'s teachings without "dumbing down" to the point where Torrance's theo-logic is obscured, even lost (no small chore!). 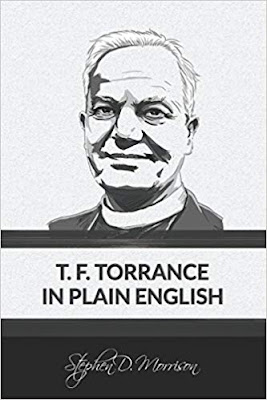 In this and posts to follow, I'll share some of what Stephen has written. In doing so I'll provide a refresher of sorts in Torrance's incarnational Trinitarian theology---the theology espoused by this blog and its sponsors, Grace Communion Seminary and Grace Communion International.

In the book's forward, Marty Folsom captures well the essence of Stephen's work, noting how it "echoes the faithfulness of Torrance to display the splendor of the grace of God seen in the faithfulness of Jesus Christ" (p. 2). Morrison does so, not by presenting a systematic summary of T.F.'s theology, but by highlighting and explaining nine key ideas he sees as fundamental to T.F.'s theology. In this series we'll explore all nine, beginning here with number one:

The first idea has to do with Torrance's theological method---a "scientific" approach to theology that yields what T.F. calls a "scientific theology." Morrison's comments:


By the term "scientific," [T.F.] means clear and precise knowledge, not impersonal or abstract. Scientific theology denotes a particular method for approaching the knowledge of God. This pursuit also necessitates a dialogue between theological and natural sciences, since Torrance thinks the theological and natural sciences are mutually indebted to, and dependent upon, one another. (p. 15)

Torrance sought throughout his career to overthrow the common, but false idea that science and belief in God are at odds and the related idea that theology and scientific inquiry are at odds. Torrance pointed out three areas where the natural sciences and a scientific theology overlap:
Reflecting on these three points of overlap, Morrison notes that theology and science need each other: Theology needs science to keep it from becoming an ideology, and science needs theology to keep it mindful of its love for truth and to remind it that its ability to know material existence is limited. Concluding this section of his book, Morrison adds this:


The cultural dualism between faith and science is falling apart on both sides of the divide. This mean the old notion that science can operate without faith, without a fundamental awareness of a "beyond" lying past its frontier, is over. (Likewise, we should say the reverse: faith can no longer operate without the natural sciences.) Science needs theology to answer the questions it is finding it cannot answer alone, because it has reached the limits of what is possible to learn in the observable universe. Theological and natural science working together can bring about a deeper understanding of the universe, together articulating the mute praise of creation to its Creator. (p. 32)

Next time in this series, as we look at T.F.'s second idea, we'll explore more fully his conviction that true knowledge (in both science and theology) comes only when we examine the object of study in accordance with its true nature.
Welcome to The Surprising God where Grace Communion Seminary (GCS) on behalf of Grace Communion International (GCI) explores the content and application of Incarnational Trinitarian Theology. Except as noted, posts are from GCS faculty member Ted Johnston. Though GCS and GCI embrace what is expounded here, blog posts are not official doctrinal statements. To comment on what is posted here, go to GCS's two Facebook groups (Trinitarian Theology Forum and Trinitarian Ministry and Worship) where many of the posts here are re-posted.