Torrance: the goal of the atonement


Last time we looked at Torrance's key idea of a threefold atonement. This time we'll explore his key idea that the goal of the atonement is union with Christ and participation in the Triune life of God. 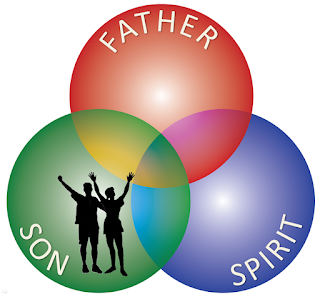 For Torrance, the purpose and goal of the atonement---accomplished in and through the Son of God via his incarnation, life, death, resurrection and ascension---is not limited to the forgiveness of sin. Rather than a message about salvation away from something, the gospel, which proclaims the atonement, tells of salvation for the sake of union with Christ and participation in the love and life of the tri-personal God. Torrance puts it this way:


The mighty act of the incarnation... is at once the act of God's humiliation and the act of man's exaltation, for he who is such amazing grace descended to make our lost cause his own, ascended in accomplishment of his task, elevating man into union and communion with the life of God. (p. 211, quoting Torrance in Incarnation, p. 57)

Torrance thus views the gospel not merely as good news of an escape, but good news of a rescue---of our "returning home to the Father's embrace." Therefore, says Morrison, in proclaiming the gospel, our "emphasis must fall on our being saved into a new life with God, not merely from sin" (p. 211).

The proclamation of this gospel of new life with God in Christ is grounded in the truth that Jesus himself is the gospel. Accepting the gospel is thus not primarily about gaining particular benefits--- it's about receiving Christ himself. Then, in union with Christ by the Spirit, we are given a share in all of Christ's benefits. By conforming our thinking to this Christ-centered, relational (what Torrance calls "onto-relational") understanding of the gospel, we then understand that


the "decision" the gospel calls us to consider is... not our own decision about God, but... God's decision about us, since it is Jesus Christ who has joined himself to us in the incarnation. When Torrance talks about union with God as the goal of the gospel [and so the atonement], he is not discussing anything that we decide to achieve in ourselves; this is the decision God has made for us. Our decision is then appropriated to his decision. (p. 212)

For Torrance, what saves us is not our decision about Christ---not our act of faith---but the faith-filled obedience of Christ himself upon which we are summoned to cast all our reliance. In that way, Torrance teaches that our faith is our reliance upon Christ's faithfulness---our sharing in Jesus' own faith (see Incarnation, pp. 26-28).

Torrance teaches that union with Christ is not only the goal of the atonement, it is the means. Sadly, many Christian theologies miss this truth due to misunderstanding the vital importance of the biblical doctrine of the incarnation, which is fundamental to the Nicene (incarnational Trinitarian) faith Torrance strongly proclaims. Through the incarnation, a union (the hypostatic union to be precise) was forged between God and humanity in the person of the God-man Jesus Christ (one person, two natures). In forging that permanent union, the Son of God bowed low to assume our humanity unto himself, and humanity was thus exalted by being united, in Jesus, with the life and love of the Triune God. The incarnation thus accomplished what what theologians call the "divine exchange" (noted by Paul in 2 Corinthians 8:9, NRSV). Morrison comments:


[Via the incarnation] Jesus Christ took up our impoverished humanity in order to heal our corrupt nature, put sin and death to death, and lifted us up into the abounding wealth of God's Triune fellowship. Union with Christ begins with Christ's union with us.... Christ must join us in our true [fallen] state of being so that we might join Christ with God in God's state of being. (p. 215)

In the words of Athanasius (also spoken by Irenaeus), "God became what we are in order to make us what he is himself." This divine exchange, being the goal of the atonement, is the heart and core of the gospel declaration. Note, however, that this divine exchange does not mean that our ultimate destiny is to become God. Instead our destiny, in union with Christ, is to become what he is in his (now glorified) humanity---fully human---a humanity "so interpenetrated and united to the Triune God that we are taken up into the deepest encounters in communion with God's eternal life" (p. 217).

Fundamental to this understanding of the goal of the atonement and the core message of the gospel, is the biblical teaching that Jesus, risen and ascended, remains forever fully God and fully human, or as Torrance likes to state it:"Now and forever there is a human being in the heart of the Trinity" (p. 218). Rather than ending with the resurrection or ascension, the incarnation was fulfilled by these great gospel events and continues forward forever. Morrison comments:


Jesus Christ remains now and forever a true human being, bone of our bone and flesh of our flesh, who mediates both the cause of God to humanity and the cause of humanity to God. Our hope for new life with God is anchored in Jesus Christ's human participation in the Trinity. (p. 218)

Participation in the life of God in union and communion with Jesus is thus the goal of the atonement and the destiny of humanity. In our glorification via the resurrection at Christ's return (parousia), we will continue to be human, but in a way by which we will be able to partake fully of the divine nature (2 Pet. 1:4). That is truly good news (gospel)! What will that be like? Torrance is careful not to speculate concerning things not explicitly stated in Scripture, though he rejoices knowing that the full experience of our humanity (which at this time is hidden in Christ, Col. 3:1-4, NRSV) is yet to come. Indeed, it will come at the parousia when we, along with Jesus, will be fully revealed.

In the meantime, on this side of glory, the ascended Lord Jesus Christ who is our High Priest is mediating---interceding for us in heaven, presenting us to the Father as "holy and blameless and irreproachable" (Col. 1:22, NRSV). Morrison comments:


This means that our worship, prayer, and faith is perfected in [Christ], as he prays, has faith and communes with the Father on our behalf and in our name. Christ's vicarious humanity takes on a continued relevance for our lives because of the ascension. (p. 223)

Thank God that, right now, as we await the parousia,


PS: In this series, I've only briefly summarized what Morrison conveys in his excellent book. Also, I've not mentioned several "sidebar" chapters in which he explores related topics that are characteristic of Torrance's theology. Among those topics are divine election, the Filioque Clause, the doctrine of Scripture, Jesus' assumption of our fallen human nature, universalism and limited atonement, and the resurrection. I encourage you to buy Stephen's book and read it for yourself.
Welcome to The Surprising God where Grace Communion Seminary (GCS) on behalf of Grace Communion International (GCI) explores the content and application of Incarnational Trinitarian Theology. Except as noted, posts are from GCS faculty member Ted Johnston. Though GCS and GCI embrace the theology expounded here, posts are not official statements of doctrine. You may comment on posts where they are reposted on GCS's two Facebook groups: Trinitarian Theology Forum and Trinitarian Ministry and Worship.